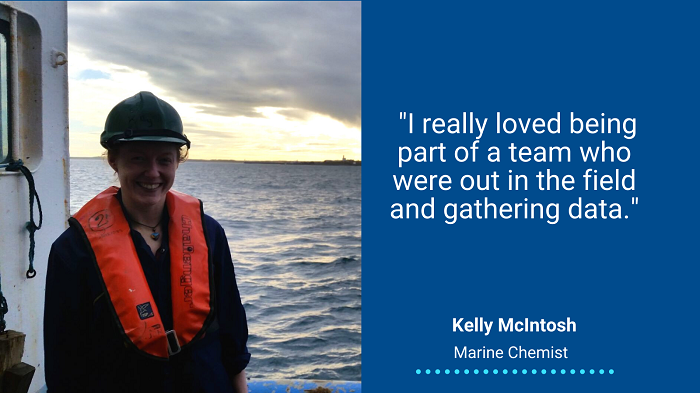 To mark International Women’s Day (8 March 2022), we are sharing some of the achievements of women working in various roles across the Marine Scotland directorate of the Scottish Government.

“I grew up in Fraserburgh, before doing a Bachelor of Science (BSc) in Forensic and Analytical Science at Robert Gordons University in Aberdeen. Part of my degree involved an 18-month industrial placement with Shell at the St Fergus Gas Processing site.

“While on placement, I worked as a technician alongside the Process Chemist carrying out compositional analysis of oil and gas samples and the components which were pumped down to Mossmorran Natural Gas Liquid Plant for further processing. We were also responsible for keeping an eye on the air emissions from the gas turbines. This was quite exciting because it involved climbing the massive stacks that tower over the site to carry out the analysis.

“I went on to complete a masters in Environmental and Analytical Chemistry at University of Aberdeen, and this was what brought me to the Marine Laboratory. My research project was based at the Marine Laboratory and involved looking at a specific type of plastic to see if it acted as a vector for the introduction of persistent organic contaminants into the marine food web.

“After graduating in 2014, I joined the Environmental Monitoring and Assessment Group, working on the determination of nutrient concentrations in sea water. In 2016, I joined my first research survey, where I supported the primary Water Chemist with nutrient analysis in the containerised laboratory, on-board marine research vessel (MRV) Scotia. This trip was preparation for me joining the December Hydro Survey as the Water Chemist, I was going solo! Although the idea was terrifying, I really loved being part of a team who were out in the field and gathering data from the long-term hydrography lines east of Orkney, which run between Shetland and the Faroe Isles.”

Eilidh Cox, is a Second Officer in our operations team 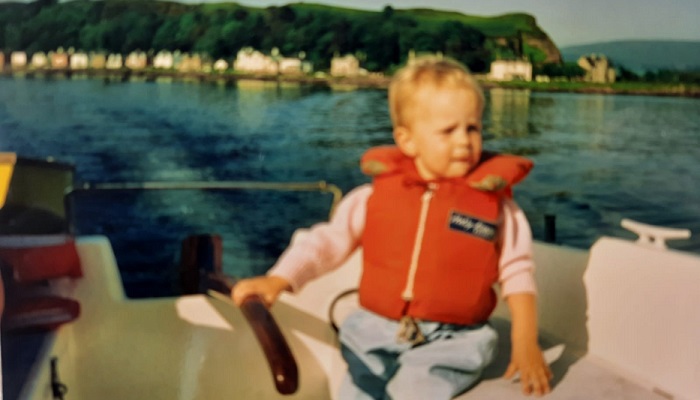 “Growing up I spent a lot of time on the water sailing with my family around the west coast of Scotland. As a child I loved the adventure of exploring our beautiful islands by boat. But it wasn’t until I was in my mid-20s that I started to consider turning my passion for being on the water into a career.

“After a year working as crew on a charter sailing yacht, I started looking into pursuing a career at sea. I learned about Merchant Navy cadetships and started applying for deck officer training schemes with various training providers.

“I was offered a place on a three-year cadetship programme with Chiltern Maritime, funded by the UK’s Maritime Educational Foundation (MEF). During my training I was placed on a number of different types of ships including an LNG gas carrier, cruise ships and a British Antarctic Survey logistics ship.

“Being able to set foot on the Antarctic continent was a definite highlight of my career to date. This range of experience during my training gave me great insight into the different possible directions I could take my career and solidified my ambition to become a Merchant Navy deck officer. 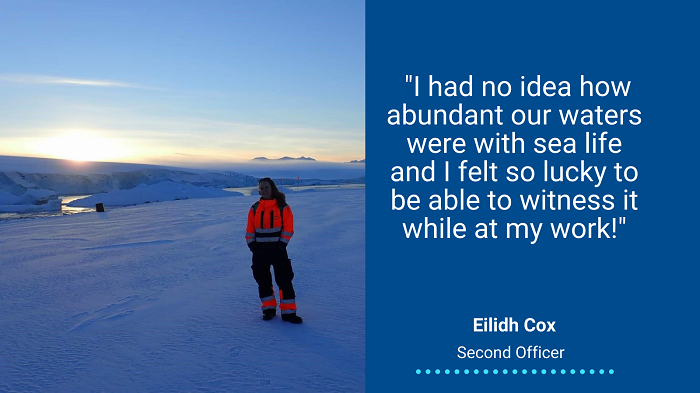 “After three years of training both on ship and at City of Glasgow Nautical College, I achieved my Officer of The Watch qualification. I was then offered my first job as 3rd Officer on LNG carriers where I spent six months working deep sea around the world.

“In 2020, I was contacted by a friend who was sailing as 2nd Officer with the Marine Scotland directorate of the Scottish Government, who informed me that there was a spot available on one of their MPVs to sail as 2nd Officer. I immediately expressed my interest and by the end of the day I was signing my first three-week contract to join the MPV Hirta in Aberdeen.

“During my first trip on-board the Hirta we departed Aberdeen and were tasked over to patrol the fishing grounds west of Orkney and Shetland, as well as in the Minch and the waters around the stunning Isle of Skye. It was an unbelievable trip where I saw more wildlife than I had seen in the rest of my career to date. I saw countless marine mammals such as orca, humpback whales, dolphins and many more; I had no idea how abundant our waters were with sea life and I felt so lucky to be able to witness it while at my work!

“Last year, I successfully secured a permanent position as a 2nd Officer within the organisation and I couldn’t be happier! I’m now beginning my training to become a warranted British Sea Fishery Officer, which will allow me to lead inspections of fishing boats in Scottish waters during fishery patrols amongst other duties. I hope to eventually return to college to gain my Chief Officer and Master’s qualifications, and have a long and fulfilling career at sea.”

Louise McKenna, is a 3rd engineer in our science team 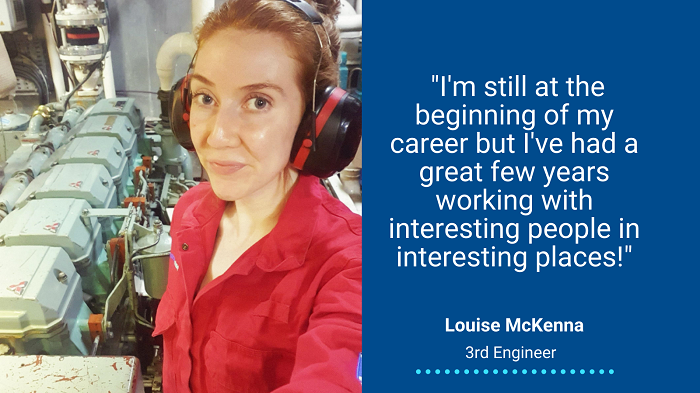 “I was born and bred in Glasgow and studied Naval Architecture and Marine Engineering at Strathclyde University. It was a great four years but as the job at the end is mostly office based, I decided that I needed something a bit more hands on. After a bit of searching around, I applied for the Merchant Navy and studied in South Shields near Newcastle.

“I was hired by a cruise ship company for my cadetship which was a great experience. I managed to see a lot of the world that I wouldn’t normally have the chance to (from Alaska to South Korea to the Caribbean), and I continued to work on cruise ships for a few years after achieving my 3rd Engineers licence. I had always wanted to work on a research vessel and the Covid pandemic provided me with the chance to start working with the Marine Scotland directorate of the Scottish Government.

“I’ve been working with Marine Scotland since the beginning of 2021 on one of their MRVs, Alba Na Mara. Our trips last for 3-4 weeks at a time with different researchers from the science lab coming on-board each trip. The work that they complete with us can vary so much from trip to trip; it could be collecting water samples near the Inner Hebrides to analyse plastic pollution, collecting seabed samples on the Scottish East Coast to analyse blue carbon levels, dropping off hydro-acoustic mooring devices in the Moray Firth to track the sounds of the dolphins and whales that live nearby or using our underwater cameras in the Marine Protected Areas around Scotland to assess how well the areas are recovering. We’re lucky enough to see a huge variety of wildlife on our travels – from baby common octopus to baby dolphins. 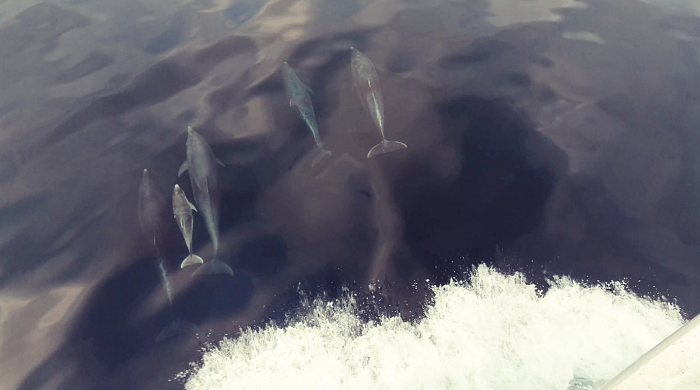 “It’s been quite a change coming from cruise ships to a small research vessel – I’ve gone from a vessel 270m in length with 2000 crew members, to 27m in length and eight crew members! The Scottish Coastal waters can be quite choppy in the winter months too, a big change from the smooth sailing around the calm Caribbean waters.

“Each day varies on-board, but it usually starts with putting on my boiler suit and doing the morning engine room round. Once it’s time to set sail from our anchor point or harbour, myself and the Chief Engineer will get all of the engines and systems started up for departure, making our way through the extensive list of departure safety checks. Throughout the day we will continuously monitor the engine room along with completing our scheduled maintenance tasks. Every so often we encounter problems with some machinery and it’s rewarding to see the system working again after the challenge of working through the issue.

“If anyone is thinking about becoming an engineer or working at sea, I’d definitely recommend asking some questions and looking into it further. I’m still at the beginning of my career but I’ve had a great few years working with interesting people in interesting places!”

In 2019, the Science team in the Marine Scotland directorate achieved the Athena SWAN Bronze gender equality award, recognising commitment to, and progress on, equality and diversity; particularly in relation to gender. Since, colleagues have been working through an action plan to continue fostering improvements to gender equality and enabling all colleagues to achieve their maximum potential.

If you are interested in a role within the Marine Scotland directorate of the Scottish Government, we have a number of different vacancies on our careers hub.