Latest research and monitoring from Marine Scotland Science indicates that not only are many rivers now far too warm to support healthy growth of fish, but in some cases summer temperatures can reach levels that cause direct thermal stress.

The latest study from Marine Scotland Science found that during the summer of 2018, the warmest on record, 69% of Scottish rivers experienced temperatures that could cause thermal stress to salmon on at least one day during the months of June to August. Salmon and brown trout thrive in relatively cool rivers.

Climate change projections from the UK MET Office suggest that summers as extreme as 2018 could be observed every other year by 2050.

While no rivers experienced temperatures that would cause the immediate death of young salmon, modelling suggested that the warmer rivers exceeded the lethal limit for brown trout. 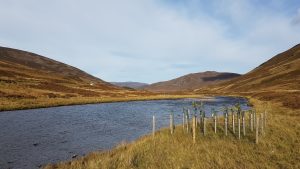 This is an issue Marine Scotland Science is addressing through the provision and further development of tools to help managers prioritise future tree planting to protect our rivers, conserve iconic wild salmon and protect and restore valuable fisheries resources.

Scottish Forestry’s Climate Programme recognises the wide-ranging benefits of riparian trees, which include the reduction of thermal stress for flora and fauna living in the river, as well as benefits for natural flood management, erosion and water quality.

• Where to plant trees leaflet

We are currently seeking applications for Physical Oceanographer within the Oceanography Group based in Aberdeen. This is a permanent and…

We are currently seeking applications for an Oceanographer within Marine Scotland Science, based in Aberdeen. This is a 18 month…