Engaging the fishing industry in marine environmental survey and monitoring 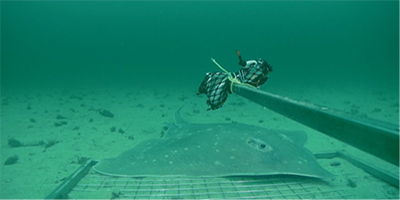 Surveys using local information from fishers have been used to better understand marine life in and around Scotland’s network of Marine Protected Areas.

The main purpose of the Marine Scotland led work, which was funded by the European Maritime and Fisheries Fund, was to record seabed habitats with a Drop-Down Video camera (DDV). The project also supported work to monitor juvenile fish abundance in relation to habitat types using fish traps and underwater cameras and ongoing research to track the movement of flapper skate using acoustic tags.

Eight DDV surveys were completed throughout 2018/19. The equipment was deployed from a fishing vessel and this sampling effort resulted in 130 hours of video footage, and 16,676 photographs.

A huge diversity of marine life was observed during the project. A highlight of this was filming herring spawn that had settled onto a bed of maerl just north of Loch Torridon.

Footage from all the surveys has been processed to identify habitats, and produce detailed maps of where they occur.

The research also sought to find out which habitats juvenile fish preferred and focused on fish like cod, haddock and whiting on the west coast of Scotland. Juvenile fish use Scotland’s sea lochs as ‘nursery areas’ to shelter from predators and find food while they grow.

Through the use of baited fish traps and DDV for monitoring juvenile fish, it was revealed that poor cod and whiting were generally the most abundant species captured, and cod, haddock, pollack and saithe were recorded in far lower numbers.

A number of flapper skate (Dipturus intermedius), once common around the coast but now extinct in many areas, were also found in the Loch Sunart to the Sound of Jura MPA (designated for their protection in 2014). The project looked to track their movements and get a better understanding of how they use different habitats and also to see if the MPA is an important breeding ground.

Through the use of acoustic tags and acoustic receiver units deployed at locations within the MPA, it was possible to track the movement of skate within the MPA and to log the presence of the skate as they swam past.

The setup of acoustic transmitters and receivers is capable of gathering data on skate locations within the MPA for up to ten years, and will contribute to long-term monitoring of the species.

Data from DDV surveys will be used to help determine whether conservation objectives are being met within MPAs, and if management measures are proving effective. It will also improve our knowledge on the distribution of Priority Marine Features (PMFs) in Scottish waters, and will contribute towards the PMF review.

The project was led by Marine Scotland, and supported by NatureScot.

More information about the EMFF project: survey reports and newsletters is on the Scottish Government website.

The full report is available here.