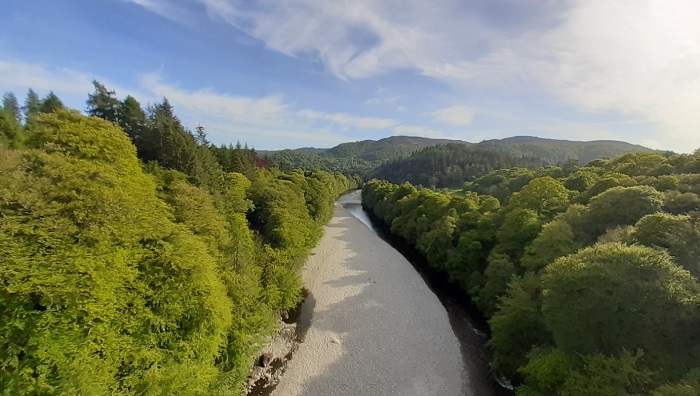 Freshwater fisheries and associated expenditure such as salmon angling, accommodation and tourism are worth almost £80 million a year to the Scottish economy. However, the number of adult salmon returning to Scotland is in decline, and 2018 was the lowest recorded rod catch since records began in 1952. It is therefore important that salmon habitats are protected and improved where possible.

River temperature is a critical control on Atlantic salmon populations which are adapted to live in relatively cool water. Salmon tend to prosper when temperatures are in the teens and struggle much above 20°C. Where river temperatures exceed 23°C this can cause thermal stress and behavioural change. At 33°C salmon can no longer survive, even for a few minutes.

During the summer of 2018, it is estimated that around 70% of rivers in Scotland experienced temperatures over 23°C. UK climate change projections provided by the Met Office indicate that summers like these could occur every other year by 2050, increasing concerns over the future of salmon in Scotland.

What can be done to reduce maximum summer river temperatures?

River levels can be managed through the release of water from dams and reservoirs, or through regulation and moderation of abstractions, a process of water removal from rivers including for drinking water and agricultural use. The amount of sunlight reaching the river surface can be reduced by riparian planting; shading the river channel with trees located on river banks.

There are considerable opportunities to increase woodland on river banks in Scotland as it is one of the most sparsely forested countries in Europe. Scotland has around 108,000 km of rivers, of which only 35% are protected by any substantial tree cover.

An example of ongoing successful riparian planting includes the Dee District Salmon Fishery Board and River Dee Trust, who have planted over 200,000 native trees along the river banks of the upper Dee and its tributaries since 2013. The new programme focusses on restoring the Dee catchment and protect salmon and freshwater pearl mussel populations with an aim to plant a million trees by 2035.

Although there are also considerable financial costs and logistical challenges of increasing woodlands next to rivers when compared with traditional woodland creation the benefits are substantial in terms of conservation, sustainability, leisure and tourism. Therefore it is important that resources are prioritised to areas where they can deliver the greatest short term benefits in terms of adapting to climate change.

How can the Scotland River Temperature Monitoring Network help us prioritise tree planting?

Data from the network has been used to develop statistical river temperature models that can be used to predict temperatures across all of the salmon rivers in Scotland. These models can be used to produce maps that identify where rivers are hottest and most sensitive to climate change. 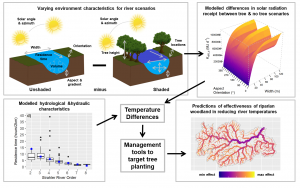 Taken together, the outputs of SRTMN statistical and process based models can be used to produce maps to prioritise tree planting where rivers are hottest, most sensitive to climate change and where trees can have a substantial effect in reducing maximum summer river temperatures.

Where can I access these new resources to prioritise tree planting?

New maps (spatial) are available to help managers prioritise the location of bank side tree planting. These mapping tools can be accessed through the National Marine Plan Interactive (NMPi) website, or brought into a local Geographical Information System (GIS) using Web Based Mapping (WMS) services, where it can be layered over other maps showing other priorities (e.g. sources of diffuse pollution) or constraints (e.g. landowner approval) on tree planting. 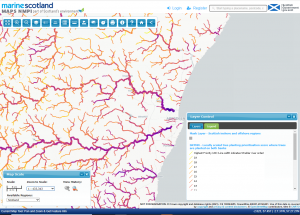