Our Niamh Webster from the Open Government Team shares her experience from her nomination to attend the Obama town hall Europe in Berlin – and meeting Barack Obama.

I’ve just spent a sunny weekend in Berlin being star struck and making new friends across the continent at the Obama town hall Europe. Pleased to be nominated to be among  300 emerging leaders – civic leaders, community activists, and those who work in government and private sector. We were all working on today’s big challenges, such as inequality, environment and technology. The Obama foundation hopes to invest in the next generation of leaders and activists, working together to ‘change the world’ – so Obama himself can relax a little. 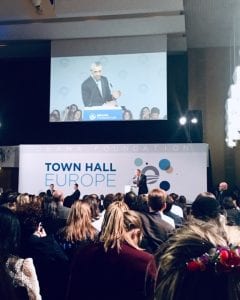 Almost every single person in the room had their hand up to ask a question to Obama so although I tried each time, there wasn’t much hope. I finally got my chance to speak to him at the end – a handshake and a very quick conversation about open government. He continued talking to me as he shook others hands along theline about the upcoming global Summit in Canada this year. 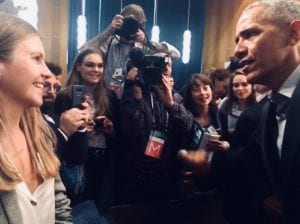 A couple key messages from Obama particularly resonated with me, especially what he had to say about government.

I’m fairly new to working in government and trying to work in a more open way. Obama’s message about collaboration reinforced my view of how we should work. Collaboration – between those inside and outside government – to move things along, together.

Government is a huge organisation with processes and rules that make things slow, and this can be frustrating for people working with us. He encouraged people to work with governments to help identify bottlenecks and inefficiencies instead of complaining, to make government work better.

Active citizens shouldn’t see government as separate from them, but instead see that part of their role is to improve government: ‘You’ve got to have people outside pushing, and people on the inside who are willing to be pushed’. If people are working together and building strong relationships, you can say to an official ‘this was great, but why did it take 6 months?’. You can suggest improvements for future, as well as highlight a number of organisations who have experience in this and could contribute.

Working on the Open Government Partnership within government, it’s explicit in the name that we work in partnership. I see the value of working with those who have expertise to share. Before I joined government, I worked for a non-profit civil society organisation and it was all about finding that one person in government who gets it and who you can work together with to make it happen.

Now, I might well be one of those people in government who is ‘willing to be pushed’ – willing to work collaboratively, to try new ways of working, all to make government work better for the people we serve. 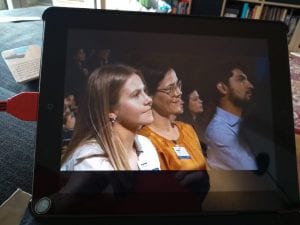 Picture courtesy of the live-stream and my family spotting me, watching from home

A somewhat grounding message for the over-excited group of ‘young, emerging leaders’. We’d all been flattered in being nominated for this prestigious event, and likley thought bold-thinking was going to continue to get us places.

Change is slow and wanting things to happen quickly is not going to work. Collaboration is key. It’s  reassuring for those of us who get impatient to demonstrate impact. And it’s a reminder that going it alone isn’t going to get you far.

Obama is known for his framing of ‘the world as it is’ and ‘the world as it should be’. Indeed, this is something Michelle Obama highlights in her book too (which I was coincidentally reading when the invitation landed in my inbox, further adding to my excitement). This feels like a powerful way to stay optimistic.

Going further than active citizens in elections, open government is about creating more participatory democracy. It’s about more opportunities for people to have their say. In Scotland, we’ve seen a move to mainstream participatory budgeting, a great example of normalising participatory practices. 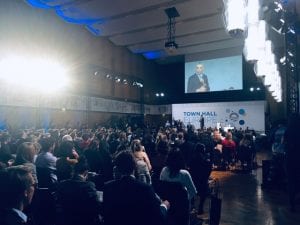 Reflections – and an extra dose of celebrity

As an extra dose of celebrity for the day, I managed to bump into Jo Swinson MP (in no other place than the queue for the loos of course). She  represents my hometown near Glasgow, and also went to my high-school. She inevitably was a bit of an inspiration to me growing up and interested in politics.

The one downside to the event was that it could have been designed in a way that gave us more opportunity to meet eachother. I’m not shy and came away with a big bundle of business cards but there could have been more space for discussion and dialogue.

I wish it had focussed more on the big issues – inequality, environment, democracy and active citizenship. Instead there was random Q&A. It gave a voice to people from different sectors, private and entrepreneurs, and issues – those I don’t always identify as much with. Perhaps it achieved its goal though, as I saw how we all play a role in improving outcomes and making the world ‘as it should be’. 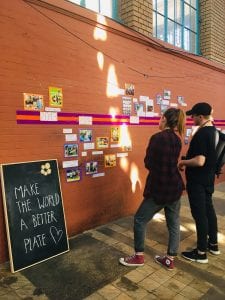 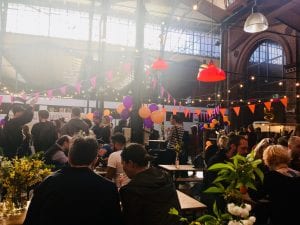 A 5th birthday party – a meaningful start to my new networks

On Sunday, after a trip to Templehof – the abandonded WW2 airfield which is now the city’s playground (and largest greenspace in a European city) to enjoy some sunshine, I went along to an event with some people I’d met the day before. We’d been invited to the 5th birthday party of the organisation which builds connections in communities and with refugees.

Our new friend Noor, originally from Syria herself, was invited to the Obama event in recognition of her work here. It was a real fun celebration with a mix of Syrian and international music and food made by the community.

It felt upbeat, young, and very multi-cultural. Though perhaps it helped that event was exclusive use of very cool Markethalle in the hip neighbourhood of Kreutzberg…

Seeing one of the community activism projects in action brought meaning to my new network of leaders across the continent. Real-life, practical and grounded – far from the glamour of the lights and cameras of the day before. Making these kind of connections was the point in us being in Berlin afterall.

Hopefully this is the start of a network of interesting and exciting future leaders across Europe and I’m lucky to count myself one of them. Sitting with young women working on gender equality and democracy and digital rights left me feeling inspired. I met some incredible people my age making the world a better place, little by little.

My new network of connections and friends has to be the best bit of the experience – even if chatting with Obama will forever be my greatest claim to fame.