The right for children and young people to have their views heard on matters that affect them and for those views to be taken seriously is one of the general principles of the United Nations Convention on the Rights of the Child (UNCRC). To support children to understand their rights, the Scottish Government Children’s Rights Unit decided to create a short animation to explain UNCRC: Introductory Guidance in a child friendly way.

We worked with Carers Trust Scotland and Parent Network Scotland to understand what young people would like to see from the project. The idea they shaped was to show a journey through a community and the types of interactions young people might have with public authorities about their rights.

Some of their direction was capture in the workshop using sticky notes:

Following the scoping phase, we worked with Renfrewshire Youth and Partners in Advocacy. Eight young people from diverse backgrounds shaped the look, feel and script of the film. This involved two full day workshops with a facilitator and the animation team.

On day one, young people shaped the animation style by sharing what they found engaging and informative, and the music and effects they liked. They also shared examples of rights to highlight and how they would like to see public authorities respond when questions about rights were raised. These examples informed a draft script.

On day two, the young people reviewed the draft script and mood boards developed by the animation team. The colour palate was important to them, they gave clear guidance to avoid primary colours, instead choosing yellows and purples. 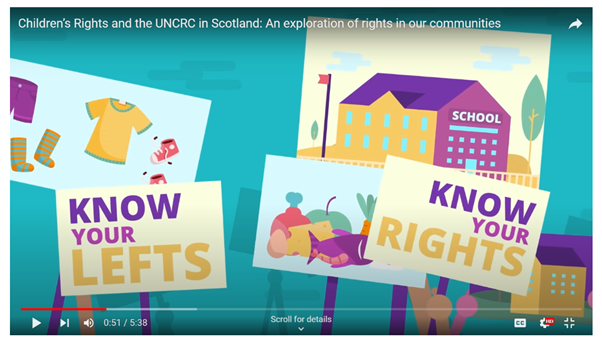 They wanted humour and references to social media in the story lines. Look out for the fox and Nessie who appear in the film!

All the young participants had the opportunity to record a section of the script for their chosen character and story. Four young people’s voices are included in the animation and social media clips. 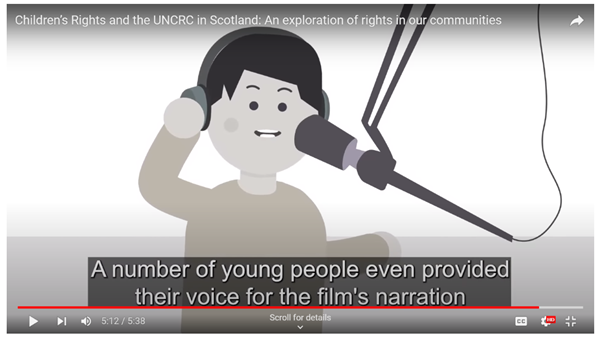 We worked closely with the animators, facilitator, and youth workers to support the participants to express their views, ideas, and creativity. As a result, they decided how the animation should look, the stories we should tell and how the characters should be presented. We thank MPG, our animation partners, for turning the young people’s ideas into reality.

To show our thanks to the young participants, we arranged a special screening of the animation, complete with popcorn! Here’s what the budding creators and the partner organisations said:

You can view the animation now on You Tube.

We hope that public authorities and children will use the film to stimulate discussion about participation and making children’s rights real. Finally, our thanks go out to all the young people involved in making this film. We hope you enjoy watching the film as much as they enjoyed making it.

We’ll be publishing a new blog here every day this week so keep an eye on @ScotGovEngage for blog announcements or check back here.

The launch of the UNCRC parents booklet

World Children’s Day 2022 (20th November 2022) saw the launch of a new and much anticipated booklet for parents, carers…

Dear Children and Young People of Scotland, I’m writing to you on World Children’s Day to emphasise the Scottish Government’s…

18th November 2022 by May Dunsmuir, President of the Health and Education Chamber of the First-tier Tribunal for Scotland