Today’s GDP figures show that the Scottish economy has bounced back. These figures are very welcome. 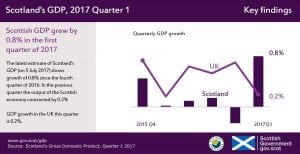 Expansion in the manufacturing sector, among others, has helped the Scottish economy to grow by 0.8% – four times the UK growth figure of 0.2% over the same quarter.

This is highest rate of quarterly growth in Scotland since the end of 2014, reflecting some of the actions that the Scottish Government has taken to support the economy, stimulate investment and create and protect jobs.

These figures reinforce the fact that the fundamentals of Scotland’s economy are strong.

Since late 2014 our growth rate has been impacted significantly by the fortunes of the North Sea with around two thirds of the slowdown in 2016 attributed to the onshore impact of lower oil prices.

While the UK economy as a whole has benefitted from lower oil prices, in Scotland the North Sea slow down along with one off impacts such as the closure of Longannet or the steel plants has impacted on manufacturing, employment and consumer spending in key areas.

This week’s figures show a rise in output in the industries linked to the North Sea for the first time since 2014, which alongside a number of recent business surveys suggests a growing confidence in the sector and that it may be beginning to stabilise.

Manufacturing output is also up, in part due to the resumption of steel production at the Dalzell plants after the Scottish Government intervened to save these key strategic assets and secure a bright future for the industry and the workforce.

Part of Q1 GDP growth in Scotland down to resumption of steel production at Dalzell – saved with the help of @scotgov intervention.

The re-opening of Dalzell is just one of the actions the Scottish Government is supporting to boost manufacturing including our support for the expansion of the aluminium smelter at Lochaber and the development of a National Manufacturing Institute for Scotland, which got underway at the old Doosan plant in Renfrewshire last month.

While today’s figures are a positive sign we will never be complacent about the performance of Scotland’s economy particularly as Brexit uncertainty continues to cast a shadow over future economic outlook.

The Scottish Government will continue to use all of the powers at our disposal and to work with business to make long term investments that will deliver benefits to our economy, including our £6.5bn infrastructure plan and our £500 million Scottish Growth Scheme which opened for bids last month. We will also continue to invest in doubling free childcare and support for key industries including oil and gas, manufacturing, tourism and new technologies.

Today’s figures are a vote of confidence in our economy and the Scottish Government will continue to work hard to support the economy through difficult times ahead.

Prev How can we improve our energy?
Next Collaborate And Celebrate All Scotland Has To Offer