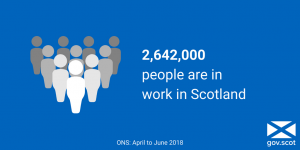 “These are welcome figures. Scotland’s economy and jobs market remains strong despite the continued challenges facing our economy as a result of Brexit uncertainty. The Scottish Government are investing a record £2.4 billion in enterprise and skills, £4 billion in infrastructure and delivering the most competitive package of rates relief in the UK, including the Small Business Bonus, which to date has saved Scottish firms almost £1.5 billion. We continue to urge the UK Government to commit to remaining in EU single market and customs union to protect jobs and investment in Scotland.” 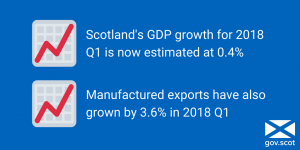 Key statistics in the publication are:

“Figures for the first quarter of 2018 also show that manufactured exports, which make up around half of the total value of exports from Scotland to the rest of the world, have grown by 3.6% reflecting the strength of international exports to the future of the Scottish Economy.” 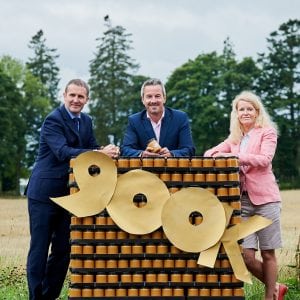 More than 900,000 premises across Scotland are now able to connect to fibre broadband thanks to the Digital Scotland Superfast Broadband roll-out. The programme reached the milestone this week meaning that more premises than ever before now have fibre broadband available to them.

“Fast and reliable internet is absolutely vital to communities across Scotland. It helps businesses stay connected with customers and colleagues, and helps families learn, work, play and shop.

“The Scottish Government is not stopping there. Our Reaching 100% programme, backed by an initial £600 million investment, plans to deliver superfast broadband access to every home and business in Scotland by the end of 2021 – the only part of the UK to do so.”