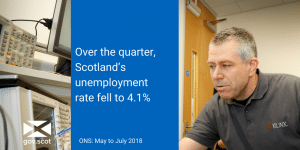 Published on Tuesday, the labour market statistics released by the ONS for May to July 2018, showed that Scotland’s unemployment rate fell over the quarter to 4.1%. 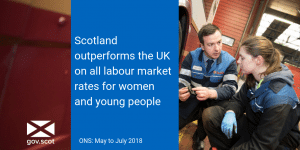 Compared to the UK we also have lower rates of unemployment and inactivity for women and young people.

“We continue to work to create the right economic environment for job growth. Our ambitious economic strategy outlined in last week’s Programme for Government includes commitments on the Scottish National Investment Bank and Manufacturing Institute, while we are also committed to the biggest infrastructure spending Scotland has ever seen. 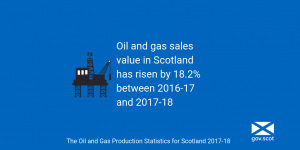 “I welcome the findings in the report which show the sector has seen an 18.2% increase in sales value. These figures reflect the increased price of oil and gas on the global markets and show confidence is continuing to return to the sector.”

“It has been a wonderful weekend of activities to mark the AWPR/B-T project. I visited the festival on Saturday and it was great to see so many people of all ages enjoying the displays and taking the unique chance to get up close with a section of this impressive new road.

“Over the course of the weekend we seen thousands of people visit, with 1,500 cyclists taking the chance to travel an 18 km loop of the new road on Sunday morning. The popularity of the events reflects the level of interest in this project across the region.

“We are looking forward to the next key section of this project opening to traffic in the coming weeks. This project is a genuine game-changer and will revolutionise transport in and around Aberdeen. We are approaching the home straight in terms of completion and this next phase will provide a key step towards improved journey times, reliability, access to markets and improved connectivity across the region and beyond.” 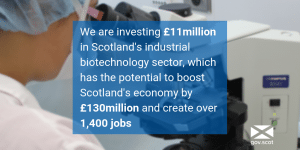