April 4, 2017 by hsca No Comments | Category Health and social care

Today, another report for the Inpatient Experience Survey 2016 was published. This time, the results being published have focused on whether certain characteristics or factors are associated with people’s experience of their care whilst in hospital. All the survey questions, which could be answered in a positive or negative way, have been included in this analysis.

The general picture shows the following characteristics have a significant association: 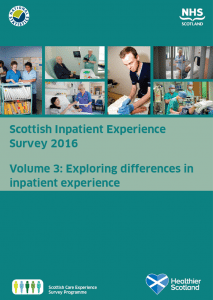 Full details of the findings and the method of analysis used can be found on our patient experience web pages.