BlogsStatisticsChanges to the 2017/18 Health and Care Experience Survey

Changes to the 2017/18 Health and Care Experience Survey

April 30, 2018 by hsca No Comments | Category Health and social care 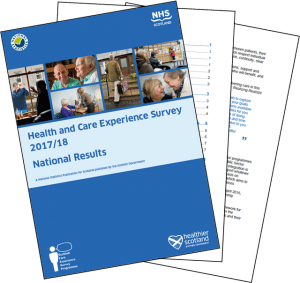 The results for the 2017/18 Health and Care Experience Survey were published last week. This was the fifth iteration of this survey. It asked people about their experiences of accessing and using their GP practice and other local healthcare services; receiving care, support and help with everyday living; and caring responsibilities.

The results showed that most GP patients and social care users reported a positive experience of their care. However, respondents were slightly less positive than in previous surveys, in particular about accessing GP services and support for carers. A copy of the full report is available at www.gov.scot/ISBN/9781788517669.

This blog post looks at some of the changes that were made to the 2017/18 survey and what the impacts of these changes have been.

Like many surveys of this type, both in Scotland and elsewhere, there has been a fall in response rates since this survey was begun. This continuing drop in response rates has caused the sample size required to increase (Table 1). Even after allowing for the reintroduction of a reminder letter to the 2017/18 survey, it was still calculated that over 600,000 people would need to be sampled to achieve the required levels of response.

Ahead of the survey going live, a number of changes were made to try and improve engagement with respondents and help to boost response rates:

This combination of changes appear to have had a positive impact on response to the survey, with the response rate six percentage points higher than in 2015/16.

The attempts to increase online response also saw significant success, with 40 per cent of survey responses completed online compared to ten per cent in 2015/16.

Copies of all of the survey materials can be found at www.gov.scot/GPSurvey.

The content and wording of the survey materials were reviewed ahead of fieldwork to ensure that they were compliant with the General Data Protection Regulations that will be coming into force on 25th May. This also included the introduction of a Privacy Notice for the survey which was highlighted to respondents within the survey letter. The Privacy Notice is available at www.gov.scot/HACEPrivacyNotice.

Changes to Analysis and Reporting of Results

As there was a significant increase in online responses for the 2017/18 survey, improvements were made to the validation of the results to ensure comparability between online and paper returns.

Figures from previous surveys included in all 2017/18 reports and files have been backdated to use the improved validation checks and new weighting methodology to ensure comparisons are available over time where possible. Reports specifically relating to previous surveys will not be updated to include the backdated figures. This means figures will differ between those quoted in the 2017/18 reports and the relevant original survey reports.

Local level results for the survey have previously been published as a series of static reports but for the 2017/18 results they have been made available via an interactive dashboard. This allows users to look at the data that’s of interest to them and to make their own comparisons of the data. The interactive dashboard can be accessed at http://www.isdscotland.org/Products-and-Services/Consultancy/Surveys/Health-and-Care-Experience-2017-18/.

Prev Scottish GDP grows by 0.3% in the fourth quarter of 2017
Next Small increase in area of organic farmland