This is a post by Gordon Clark, one of our Infrastructure Engineers, and Jono Ellis, our Social Media Manager.

This post is the second post in our series covering how we approach continuous delivery, covering the tools that we use.

We are not precious about our servers, they are just tools for a defined purpose and when they’ve reached the end of their usefulness we can get rid of them. They are disposable. This is something you can only do with cloud computing – we don’t own a physical server anywhere; instead we create and configure servers from our cloud providers. The benefits are the speed and agility that this setup offers us. As an example, in order to test a proof of concept we could spin up several servers to do a task, gather whatever stats we needed, and then we could destroy them. With no physical server needing to be purchased, set up, powered, etc. there are significant environmental benefits to this approach.

We use several tools in order to facilitate our server configuration management:

The role a server is provided with equates to a business need i.e. a web server, an application or a database server.

Each role (e.g. web server) has an accompanying module in Puppet. This Puppet module in turn contains one or more technology profiles, which are also described in Puppet. Each host can only be assigned a single role but each role can contain multiple profiles (which is turn can contain multiple modules). The modules are directly related to an individual technology, e.g. NGINX, Java or PostgreSQL. The diagram below shows how the hierarchy is arranged. It should be noted that the modules are generic, they can be used in any environment and do not contain any configuration related to an individual host. The configuration data is abstracted to Hiera. 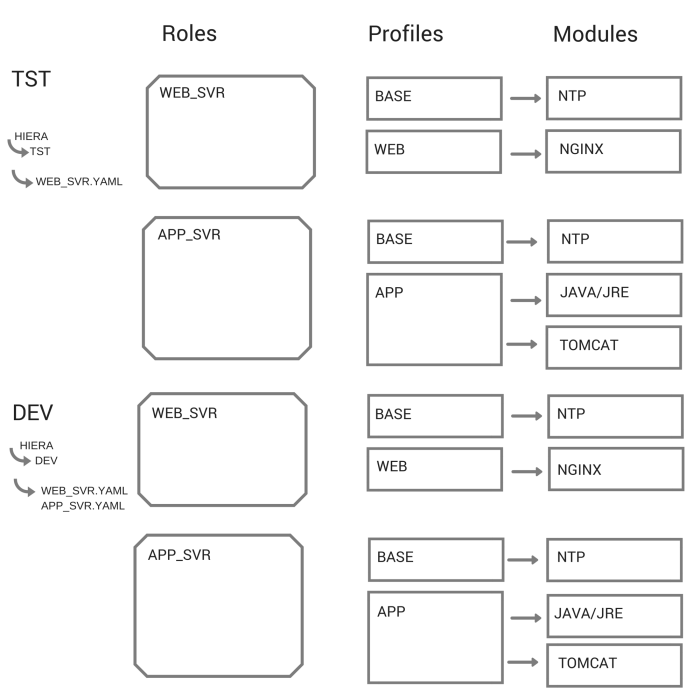 In addition to the role, each server is assigned to an environment (i.e. dev, test or production), and from that it picks up the appropriate state and configuration. We use Puppet because Puppet is good for saying what state something should be – what packages should be installed and how they can be configured.

The code below gives you an example of setting up the role of a web server which will be spun up with an Nginx profile.

[code]
#- file: modules/profile/manifests/base.pp
#- Class: profile::base
#
# Class to install the base requirements for any host
#
class profile::base {

We do things in the cloud but we’ve created some example code which will run on your own computer. At the end of this article we have included instructions and a link so that you can run this Puppet example on VirtualBox.

For example our environment/role configuration is arranged as follows in Hiera:

The process we follow to apply our Puppet manifests/configuration is as follows:

We don’t have to worry about how to scale Puppet because it is self-contained and runs locally on the target box i.e. there is no Puppet master. We treat Puppet manifests as artifacts themselves so they can be tested and promoted through the pipeline accordingly. This agility comes into it’s own when news of a security vulnerability (such as Shellshock or Heartbleed) is announced online – we have the ability to make security updates quickly and with relative ease.

Many people use Puppet masters and both setups have their advantages, as do alternate setups using Chef or Ansible. We chose to go masterless as it was the best fit for us; we can version control Puppet, treat it like an artefact and orchestrate Puppet how we want. We are also not subject to scaling issues as there is no need for certificate agent. Any problem we can roll back or rebuild as appropriate.

You can download and play around with our example following these steps:

Once the VM’s are up and running, open any browser and navigate to http://localhost:8080 for the web server and http://localhost:9090 for the app server (the servers.yaml file has details of what ports are forwarded).

We’ll be sharing updates on this topic, and much more on social, so follow the team via @mygovscot on Twitter for more updates. Got a question or want to comment? Get in touch below!