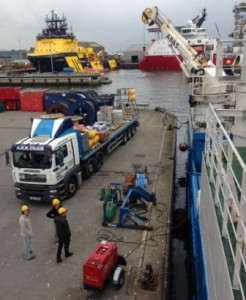 This survey is a joint venture between partners of the Marine Alliance for Science and Technology in Scotland (MASTS) (see the blog published earlier this week). Scotia will make passage from Aberdeen to the site where the whale-bone lander will be deployed in approximately 1800 m water depth in the Rockall Trough (see Map). Scotia will then move approximately 100 miles to the western margin of Rockall Bank to the vicinity of the cold seep at depths of approx.1200 m. Once in the survey area operations will alternate between eight hours video survey, eight hours benthic sledge and Agassiz trawl deployments and eight hours megacore/lander deployments. Some flexibility in scheduling may be necessary to maximize the opportunity for visual survey during favourable weather conditions and to account for how quickly signs of the cold seep habitat are detected. It is anticipated that three to four days will be spent surveying the cold seep area. Scotia will then move approximately 25 miles west to the Hatton-Rockall basin MPA site for a further two to three days’ work. There a similar survey plan will commence as before. Assuming favourable weather, Scotia will return for Aberdeen sometime in the early hours of 25 July and plan to dock in Aberdeen the morning of 27 July. 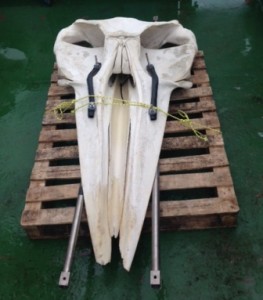 Objective 1: The first objective is to deploy the ‘whale-bone’ lander (see right) in approximately 1800 m water depth in the Rockall Trough (see Table 1 and Map 1). The lander is essentially a pyramid frame with cameras at the base monitoring a fixed whale bone. The lander will free fall to the seabed where it will remain for a period of one year before being retrieved by SAMS (via acoustic release).

Objective 2: Towed TV survey operations will commence along the three to four mile long trawl track where the species indicating the cold seep were collected in 2012. The camera will be towed at a speed of one to two knots for tow to three hours at depths of approximately 1200 m. The survey will need to adapt according to what is observed and whether there are clear signs of a cold seep ecosystem (e.g. gas-hydrate crusts, mussel beds, tube worms). If a cold seep habitat is located, parallel transects approximately 0.5 km apart will be made to ascertain the extent of the ecosystem.

Objective 3: Assuming clear signs of the cold-seep habitat from TV survey, benthic sampling will be undertaken in the identified area and the adjacent seabed for comparison. The Agassiz trawl will be deployed from the plankton crane from the hanger deck. The trawl will be towed at a speed of one to two knot for a duration of 30 minutes bottom time. Samples will be decanted in baskets on deck and sorted in the fish house. The epibenthic sledge will be deployed off the main trawl deck and down the stern ramp. The sledge will be towed at one knot for a period of 30 minutes per deployment. The sledge collects a considerable volume of sediment that will need to be decanted in buckets and sieved.

Objective 4: The Van-Veen grab, megacorer and mini gravity corer will be deployed using the hydro three winch from the hanger deck. The megacorer will be the priority sampling method, but the Van Veen grab and minicorer will be used as a back-up. The van-Veen grab may be used to test the sediment type prior to deploying the corers. It is anticipated that two deployments of the megacorer will be possible in each eight hour shift. Individual cores (n = 8 per deployment) will be allocated according to scientific need. Samples will be processed in the wet fish lab.

Objective 5: The baited camera lander will be deployed at the beginning of each corer/lander shift and retrieved at the end of that shift. It is fitted with dual acoustic releases actuated by a deck box on the ship (transducer held manually over the side). Upon release the lander will rise to the surface at approximately 40 m.min-1. The lander is fitted with a large orange flag, a VHF beacon and a xenon strobe that will activate in low light conditions. The lander frame itself is small and the buoyancy comprised of multiple modules snapped off-line into a mooring line. The flag and floats are paid off the ship by hand and the lander lifted into water using the crane. It releases using a quick release mechanism. On recovery, the mooring is grappled and the first float is uncoupled, freeing the line to be attached to a tugger winch with the line fed through a block on a crane. As each float reaches head height they are uncoupled individually followed by the lander which is lifted back on by the crane. The lander is fitted with quick-release tag lines that are hooked, subsurface, by boat hooks to steady it as it is lifted clear of the water. 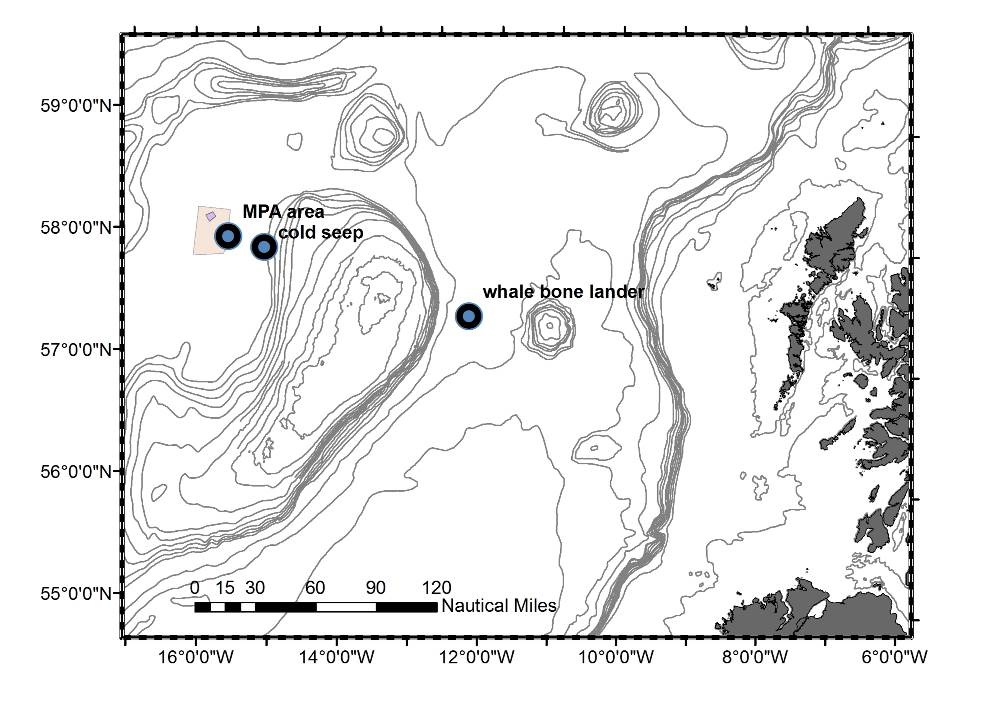 River temperature is a critical control on Atlantic salmon populations which are adapted to live in relatively cool water.