Scotia left Aberdeen harbour this morning after two days of hectic mobilisation. On Tuesday morning Scotia’s deck resembled some kind of sub-sea jumble sale, but the scientists and Scotia’s crew worked hard to gradually transform it into what now looks more like a marine science expo. The most spectacular is a seabed lander that Oceanlab scientists have loaded with a whale skull, time-lapse cameras, current meters, and sensors. 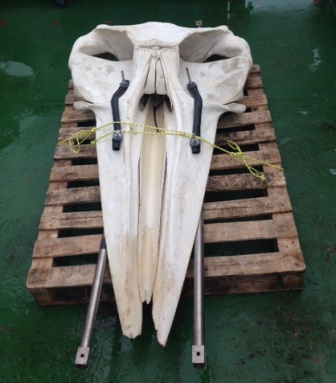 That’s not all of course, we have Marine Scotland’s towed HD video chariot for mapping the seabed, BGS’s sediment corers, beam trawls and SAMS’s benthic sledge. After some safety drills and testing of equipment in the Moray Firth, Scotia has now set a course for the east side of Rockall where the whale skull lander will be deployed. We are now just entering the narrows of the Pentland Firth, but it will be another 30 hours of steaming before we get there. At least the wind is behind us for the time being. There is genuine mood of excitement about the trip. Looking forward to getting there.