Glitter-pickers put some sparkle back into the community 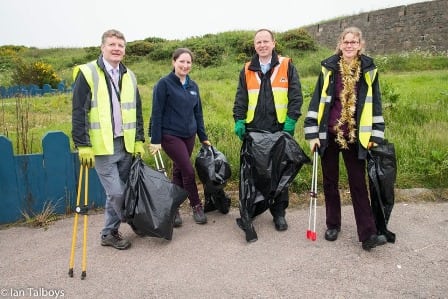 Last Friday (24th June) the Marine Laboratory took part in a litter pick event, organised by the Aberdeen City Council’s (ACC) environmental team. The Glitterpick, designed to help “make the city sparkle more in the summer months”, involved 24 local schools and community groups; who each took one of the 24 areas selected, around the city, to clean up over a 24-hour period.

Together with colleagues from the ACC and Dolphin Watch our Danny Pendrey joined in on the Torry Battery clean up . The total effort collecting was 360 minutes, and they collected eight bin bags full of rubbish and a heavy rope fender. Well done to everyone involved in not only the Torry litter-pick but the whole Glitterpick event – a truly outstanding achievement for such a worthwhile cause.