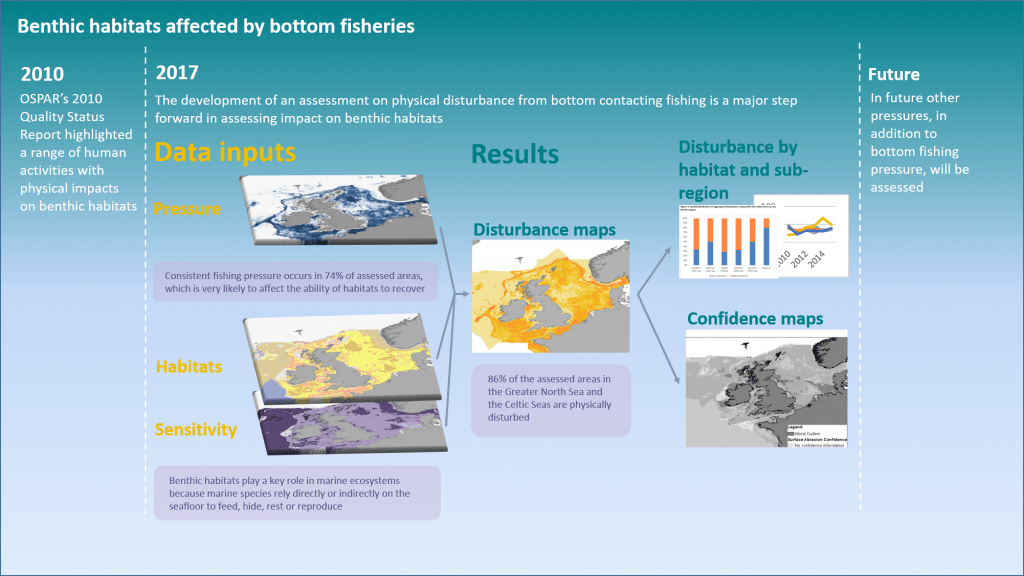 OSPAR is committed to protecting and conserving ecosystems and biodiversity through the management of human activities and is guided by an ecosystem-based approach. Benthic habitats play a key role in marine ecosystems because marine species rely directly or indirectly on the seafloor to feed, hide, rest or reproduce.

The last OSPAR Quality Status Report (QSR 2010) highlighted a range of human activities with physical impacts on benthic habitats. Focus was given to the impact of benthic fishing on seabed habitats and associated benthic communities, especially on the continental shelf and in vulnerable marine ecosystems in the deep seas.

The development of a regional-scale assessment on physical disturbance from bottom contacting fishing since the QSR 2010 is a major step forward in assessing the scale of this impact. An important initial step towards this assessment was a first region-wide mapping of fishing pressure in 2013, which has since been updated annually. These data have now been combined with region-wide information on the distribution and sensitivity of benthic habitats. A first OSPAR assessment of physical disturbance from bottom trawling is now presented, which shows that 86% of the assessed areas in the Greater North Sea and the Celtic Seas are physically disturbed, of which 58% is highly disturbed. Consistent fishing pressure occurs in 74% of all assessed areas, which is very likely to affect the ability of habitats to recover.

Bottom fishing pressure is one of several pressures that need to be taken into consideration in assessing the cumulative effects of human activity on benthic habitats. In future, this indicator will be developed to include pressures other than bottom fishing.

Alongside this assessment, a new multi-metric approach has been developed to assess the condition of benthic habitats in relation to the full range of pressures, including from other human activities. First assessments under this approach examine the condition of coastal habitats in response to nutrient and organic enrichment and species diversity in subtidal sediments in the southern North Sea in response to physical disturbance caused by fishing.