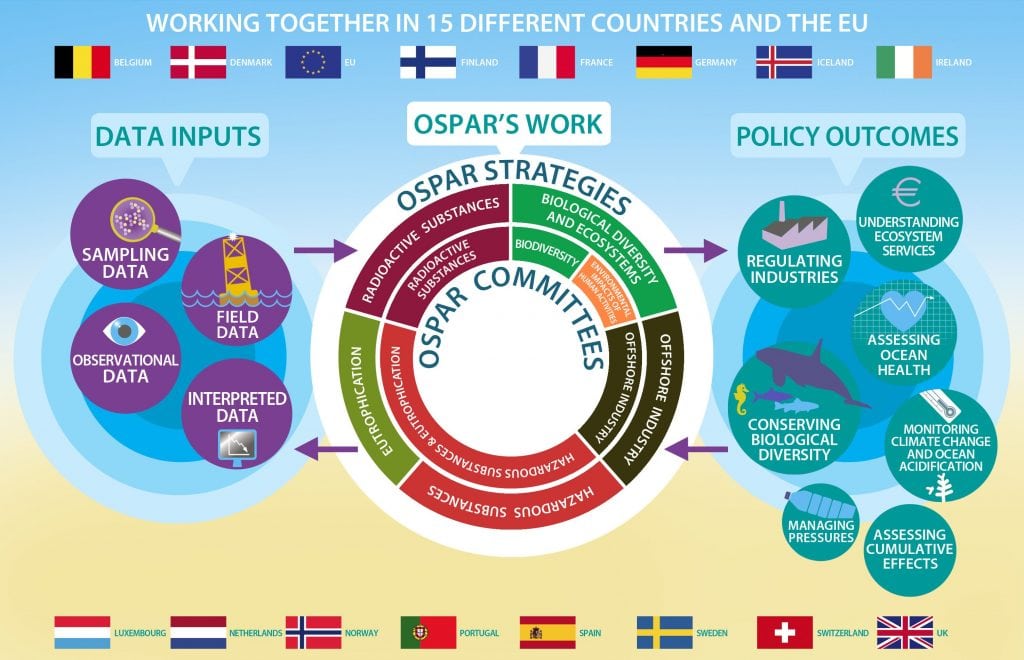 The OSPAR Commission is the competent regional organisation guiding international cooperation on the protection of the marine environment of the North-East Atlantic.

Through the global circulation of water and air, the North-East Atlantic is connected to, and impacted by, events in other parts of the world. As such, collaboration among governments and between government scientists, academia, non-governmental organisations (NGOs) and stakeholders is critical in the provision of evidence and the implementation of processes and procedures to ensure that human activities impacting on the marine environment are managed appropriately.

OSPAR ensures that it is connected to other organisations and entities through cooperation and shared involvement, with a goal of ‘protecting and conserving the North-East Atlantic and its resources’.

The now superseded Oslo and Paris Conventions date back to the early 1970s, and were merged to form the OSPAR Convention 25 years ago. This long history of cooperation between the OSPAR countries in protecting and conserving the North-East Atlantic and its resources has been fundamental to the production of coordinated assessments.

This Intermediate Assessment has offered opportunities for collaboration in new fields, such as indicators of biodiversity, litter and noise. The 47 assessments demonstrate the close cooperation and coordination between OSPAR countries, as well as with other regional organisations.

Within OSPAR, countries work to facilitate the coordinated implementation of the European Union Marine Strategy Framework Directive (MSFD). OSPAR contributes to ensuring that assessment methodologies are consistent across the North-East Atlantic, that environmental targets are mutually compatible, and that monitoring methods are consistent so as to facilitate comparability of monitoring results.

Looking to the future, OSPAR has developed a new data and information portal which will allow better collaboration and data exchange between OSPAR countries and other organisations. With readily available and well maintained data, the effort required to undertake assessments in the North-East Atlantic will be reduced. OSPAR is instrumental in supporting the delivery of the targets on biodiversity under the United Nations (UN) Convention on Biological Diversity and the UN 2030 Agenda on Sustainable Development Goals (especially SDG 14). In this context, OSPAR works with the North-East Atlantic Fisheries Commission (NEAFC) on biodiversity targets and has a role in addressing marine litter.

Prev Keeping track at Armadale: Update three from the tracking project
Next When I’m calling you…