When I’m calling you… 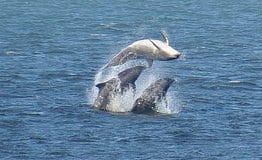 A new paper using underwater sounds to classify dolphin species has been published by researchers from the University of St Andrews and Marine Scotland Science (MSS).

Many species of marine mammals use sound to navigate the seas and find food and their echolocation clicks can be detected by specialised underwater acoustic instruments. The MSS East Coast Marine Mammal Acoustic Study (ECOMMAS) has been deploying echolocation click detectors and broadband sound recorders at 30 locations across the Scottish east coast since 2013. Of key interest is the habitat use and movement of harbour porpoise and bottlenose dolphins in this area.

The echolocation click detectors are able to discriminate between dolphins and porpoises, but not between different dolphin species. Since there are at least four different dolphin species that use these waters, there has always been some difficulty in determining which species was being detected but this new paper shows that the dolphin detections can be split into two groups – one group contains likely detections of bottlenose dolphins and common dolphins, and the other of white-beaked dolphins and Risso’s dolphins. This represents a big step forward in being able to determine where the important areas for bottlenose dolphins are across the Scottish east coast.

In addition, the results show that while bottlenose dolphins are detected regularly in the inner Moray Firth, there is a much more diverse mix of species in other areas of the eastern Scottish coast, where it is likely that all four species of dolphin can be found.