Engaging the Fishing Industry in Marine Environmental Survey and Monitoring

Marine Scotland has been involved with this EMFF-funded project which is aimed at involving fishing vessels in MPA monitoring. This is a joint project between Marine Scotland and Scottish Natural Heritage. The project is managed by Seascope Fisheries Research Ltd, with Charlotte Johnston of Crangon Ltd providing monitoring survey expertise.

This is the first in a series of guest blogs from Kyla Orr from Marine Ecological Consulting, who is supporting stakeholder engagement on the project. 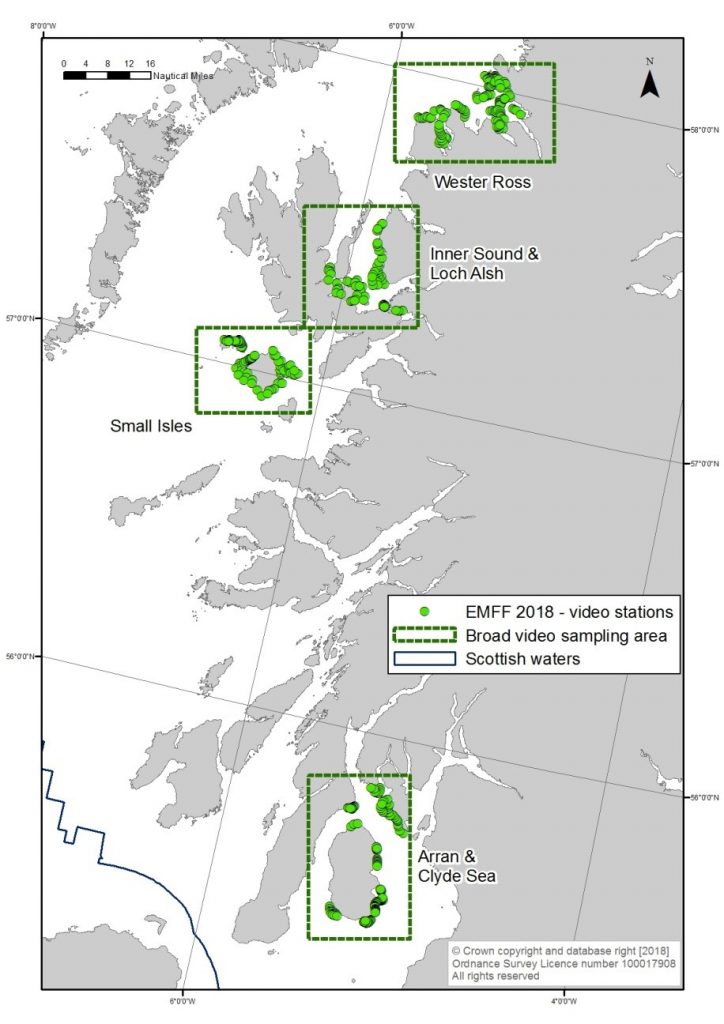 This has been a busy year in terms of surveying life on the seafloor within and around Scotland’s Marine Protected Areas (MPAs). The project invited fishing vessels to work with a team of scientists* to gather footage of the seabed using a drop-down video camera (DDV). Four areas were visited including Loch Alsh MPA and the Inner Sound, Wester Ross MPA, Small Isles MPA, and South Arran MPA . In total 427 video tows were completed and just over 4400 high definition photographs the seabed were taken, documenting a huge variety of marine life (survey sites are shown in the map below). The purpose of gathering the footage was to help us improve our knowledge of the habitats present  in our seas, their extent and current status.

The DDV camera, which is mounted inside a sturdy metal frame, requires considerable team work between scientists, crew and the skipper to operate successfully (and avoid obstacles on the seafloor!).  The skippers and crew aboard the fishing vessel had good local knowledge of the habitats present and tidal conditions, which proved invaluable to the surveys.

The full collection of video footage and photographs from these four surveys will be analysed in 2019, and the results will be used to  assist with monitoring in the MPAs. The final report will be published on the Marine Scotland website, and all  data will be archived to national data storage systems and made available for other uses

Following on from successful surveys in 2017, a further four surveys of juvenile fish abundance were completed in 2018, using fish traps and baited cameras to investigate habitat preferences of cod, haddock and whiting. These surveys were carried out in Loch Ewe (Wester Ross MPA) and  South Arran MPA. In addition, common skate were monitored in the Loch Sunart to the Sound of Jura MPA using acoustic tags to track their movement within the MPA.

The surveys are now complete for 2018, however more are planned throughout 2019, including drop-down-video surveys for the Inner Sound (Skye and Lochalsh), Sound of Jura, Islay, Orkney and Shetland. In addition, there will be opportunities for fishing vessels to charter for fish trap surveys and to deploy moorings for the skate tracking project. Marine Scotland will once again be inviting fishing vessels to assist with these surveys, and new invitations to tender (ITTs) will be released shortly. The ITTs will be released to vessel owners that have expressed an interest in the project, and vessel owners can find out how to register their interest in the project and receive ITTs on the Marine Scotland website.

(Left) Drop down video camera being lowered over the side of the vessel, (Right) watching the live video stream in the wheelhouse. © Lisa Kampenhausen / SNH