The survey will depart from Ullapool and, conditions permitting, proceed south through the Minch to the first trawling station on the shelf slope within statistical rectangle 41E9.

Trawling will mainly be at fixed stations at depths of: 500, 1000, 1500, 1800 and 2000 m on each transect where possible. Additional trawls may be undertaken at intermediate depths within selected transects. Trawl duration will typically be one hour and the locations of trawling stations will be provided to the vessel at the commencement of the survey. Daily meetings with take place between the fishing master, captain and the Scientist in Charge (SIC) to discuss and refine the survey plan as the survey progresses.

While it may be on occasions necessary to trawl at night, it is expected that trawling will mainly be conducted within the hours of daylight. Short deployments of either an MIK net or Manta Trawl will be undertaken directly after the last trawl on an opportunistic basis. The rest of the night will be spent in passage to the sampling area for the following day.

On selected tows a ground gear bagnet will be attached to the BT184 for benthic sampling. The Agassiz 2 m benthic trawl will be deployed for short (2-5 minute) hauls in certain areas.

From all tows the entire catch will be sorted, weighed and length-frequency data collected for all fish species encountered. Invertebrate by-catch will also be recorded. Additional biological sampling will be carried out on selected species.

If time permits following completion of survey stations on the shelf slope and at Rosemary Seamount, Scotia will transit to squares 48E4 and 49E4 and trawl on fixed stations (not illustrated) previously undertaken in 2014 in depths of between 300-1100 m. 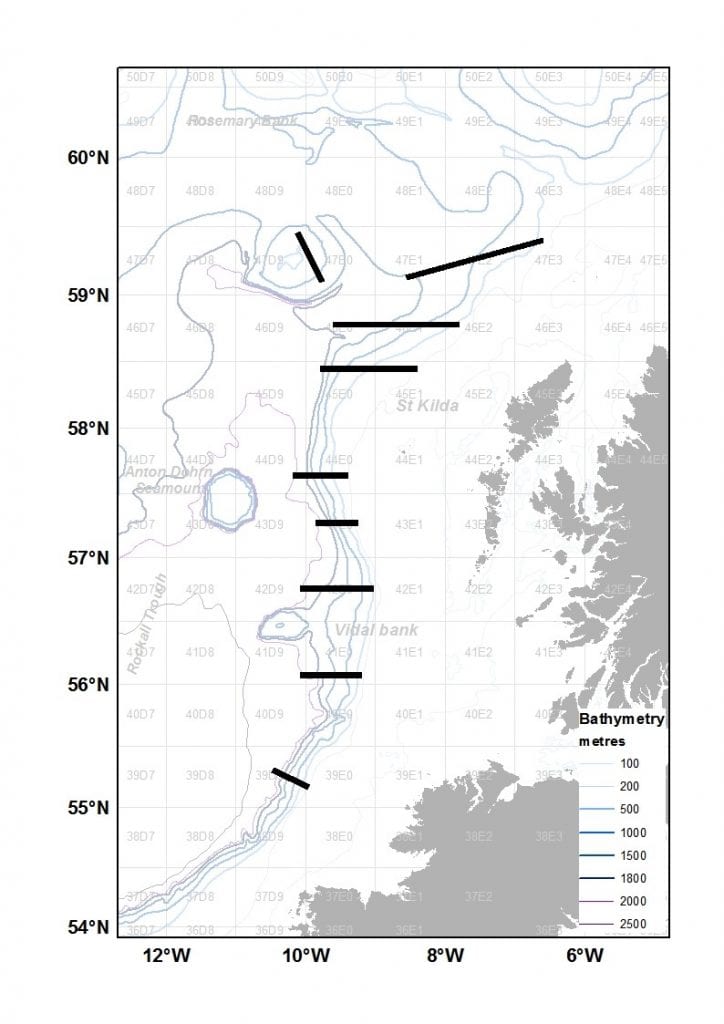 Prev A Splash of Colour at the Marine Lab
Next Joint Warrior Training Activity: 5th-17th October 2019