King Scallop Surveys in the Clyde

Survey will depart from Troon on 4 October with the aim of conducting a dredge survey of king scallops in the Clyde region. This is a preliminary survey to collect catch rate data in an area that has not been recently surveyed for king scallops. The survey will also collect biological information on this species.

Once vessel drills have been undertaken, the vessel will steam to the first station, the order of which will be which will decided by the SIC in consultation with the skipper. Scallop dredge hauls will be conducted at stations shown in Figure 1. These positions have been agreed in collaboration with fisherman, industry representatives and external stakeholders.

Hauls will be of 30 minutes duration. From each haul all king scallops will be measured to the half centimeter below and aged. In addition, numbers and size distribution of commercial fish and shellfish species will be recorded along with scallop shell damage and starfish numbers and species.

A sub sample of king scallops will be selected for ring measurements to enable growth studies. A separate sub sample will be dissected to collect biological data which will include examination of the gonad to try and ascertain spawning period. Scallops (10 individuals per station) will also be collected from selected sites and frozen for heavy metal analysis back at the laboratory.

Any litter collected in the dredges will be recorded as set out in the standard operating procedure and placed in bags to be disposed of on return to port. Camera trials will be carried out if conditions and time allow – with the aim to collect footage of the fishing gear while in operation.

If time allows; additional stations may be added out with the Clyde. Areas of particular focus would be to the south of Islay and the area to the east side of the North Channel. 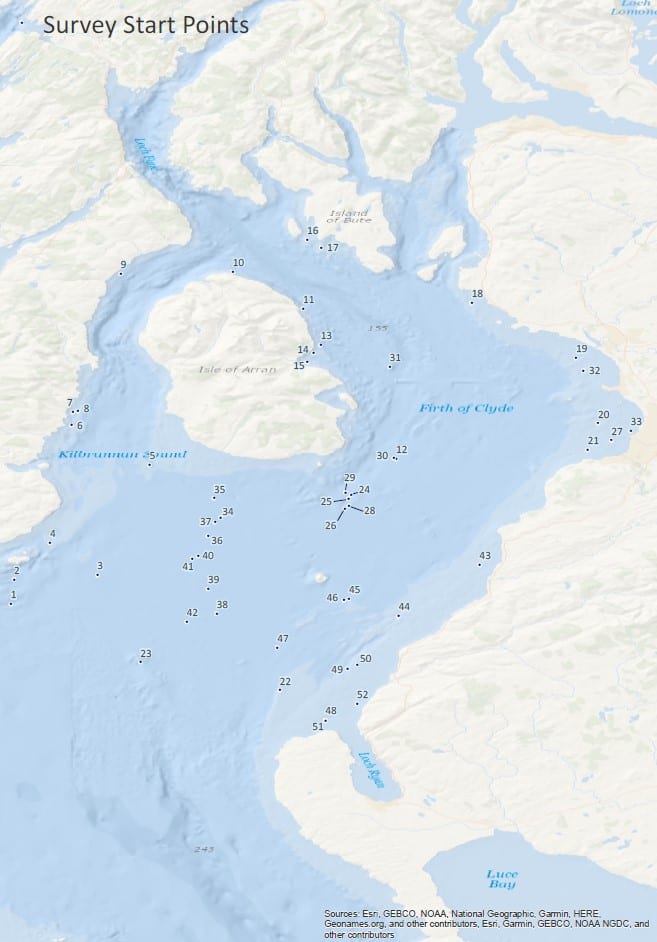