1. To complete an internationally coordinated demersal trawling survey in the North Sea in ICES area IV.
2. To undertake MIK sampling for pre-metamorphosed herring and sprat larvae during the hours of darkness within the trawl survey area. MIKeyM samples will also be collected from the MIK deployments.
3. To obtain temperature and salinity data from the surface and seabed at each trawling station using a SEABIRD 19+ CTD.
4. To collect samples of surface and near seabed water for nutrient analysis (nitrates, silicates and phosphates).
5. To collect additional biological data in connection with the EU Data Collection Framework (DCF).
6. To collect electronic monitoring footage of selected species of known length on the conveyor belt.

Hauls of 30 minutes duration will be made using the GOV trawl. Wherever possible, fishing will be carried out during daylight hours as defined below:

The survey area is outlined in the attached chart (see Figure 1) but the exact fishing position will be decided in collaboration with the fishing master. The Scanmar system will be used throughout the survey to monitor headline height, wing spread, door spread and distance covered during each haul. A bottom contact sensor (BCS) will be attached to the ground-gear and the data collected will be downloaded after each haul.

Catches will be processed as per the most recent version of the IBTS sampling manual (ICES SISP 10 –IBTS IX) with additional biological data collected for species as determined.

Pre-metamorphosed herring larvae will be sampled during the hours of darkness with the MIK mid-water trawl (Round frame). A minimum of two double oblique tows is planned for every square within the assigned survey area. The vertical profile of the tow will be monitored using the Scanmar system. During this survey the small 20 mm round frame net (MIKeyM net) will also be deployed on all MIK stations for the purpose of collecting pelagic fish eggs from the survey area.

Surface and bottom temperatures and salinities will be taken at all trawl stations. 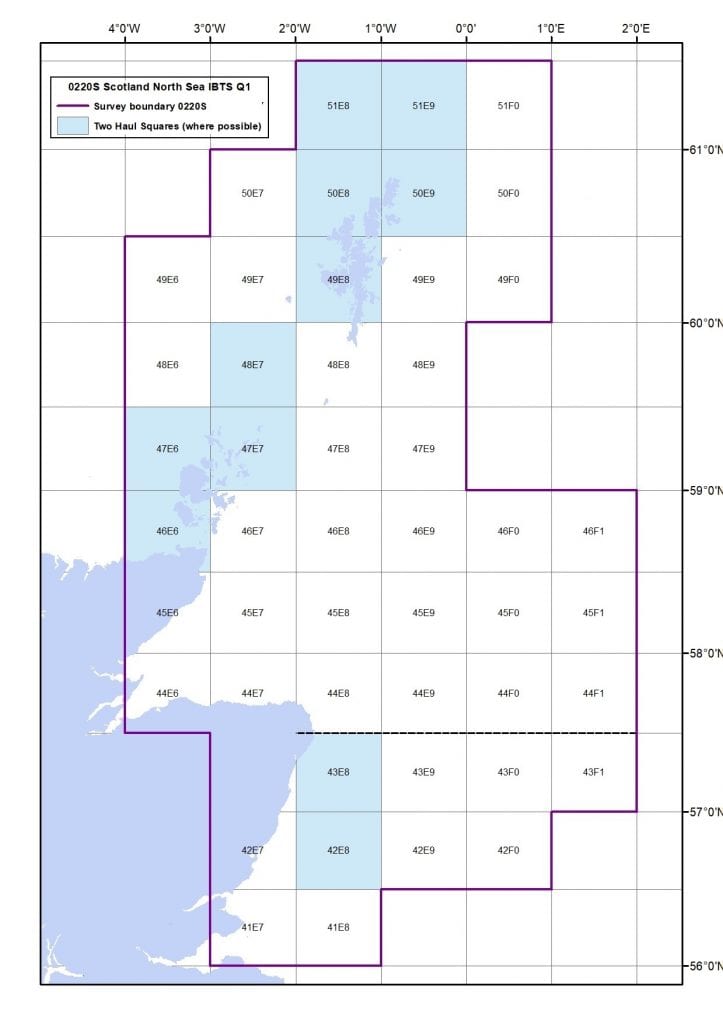