Testing technology in the fishing sector

An international research project that is developing, testing and promoting new technology systems in the fishing sector is being trialled in Scottish waters by Marine Scotland scientists.

Now in its third year, the Smartfish H2020 project, which is funded through the EU’s Horizon 2020 fund and coordinated by the Norwegian research institute SINTEF Ocean, will be testing automated technologies that recognise, identify and counts fish in video footage from cameras on fishing boats.

Smartfish H2020 partners will discuss priorities for the third year of work, including how Marine Scotland plans on testing the technology in Scotland over the next two years, at a meeting in Aberdeen February 11 – 13.

Alongside this work to recognise, identify and count fish in video footage from cameras, Marine Scotland scientists have also been investigating the effects of light on the behaviour of different species of fish. 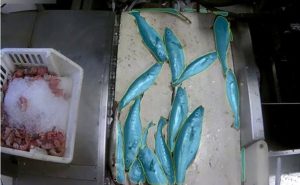 The Computer Vision System automatically identifying some whiting as they pass along a conveyor belt.

By steering them into different parts of the net, the fish may encounter other measures like ‘square mesh panels’ or sorting grids which can help smaller fish or less desirable species to escape.

“Over the last ten years Marine Scotland has been a leader in the field of using machine learning to recognise, identify and count fish in video footage from cameras.

“Using computers to automate the process in this way is a great step forward as it is quite a time consuming task for staff to go through and review videos manually.

“By using cameras we have to send fewer staff to sea on fishing vessels, which saves money and exposes them to less risk.”