Our approach to testing

This is a post by Rajesh Yarlagadda and David Vidal, our test engineers.

This post is the third post in our series covering how we approach continuous delivery, covering our approach to testing.

Testing is an essential component of each and every phase of the mygov.scot development process, with quality being “baked in” to the product at every stage. This blog post provides an overview of how we approach testing, and some of the tools we use. Feel free to get in touch if you’d like to know a bit more about a particular technology or our reasons behind using it.

After creating a new feature to meet a particular user need, our developers submit changes to our version control system – this can include source code, environment modifications and configuration files.

Following a commit to the version control system, the continuous integration server will do the following: 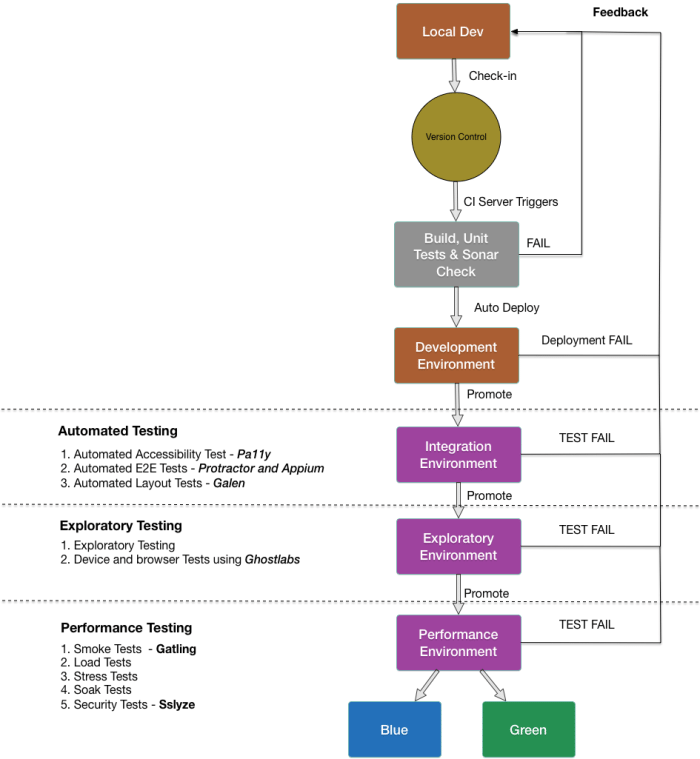 The performance test environment is designed to run performance tests i.e. smoke tests, load tests, stress tests, soak tests and security tests. On completion of testing, the feature changes will be demonstrated to the product owner and other stakeholders.

On completion of the demo, testers record the component versions and save this as the ‘last known good version’, after which relevant artefacts are pushed to the build repository server.

Every Monday, the mygov.scot team will create either a blue/green off-line production environment using the ‘last known good version’. Smoke testing is carried out on the off-line environment before it is switched over to being the live, production version.

There are many different types of test we perform – the starting point is the user story, written for each new feature before work begins. Before a feature is even validated against the user acceptance criteria we validate against system quality attributes – performance, accessibility and security. Once we complete these tests the next stage is exploratory testing, to validate the story.

We look to ensure that we have:

Testing takes time – performance tests run in the background and can take up to a day to run per test, manual tests take several hours per day. With every new test added the quality of our work goes up, with every test automated or moved to an earlier stage in the process we can spot and correct issues earlier. We’re working to include performance testing as part of our continuous integration server process as this will allow us to spot code which has the potential to slow the site down and correct it much earlier.

Security testing is currently more reliant on manual processes and is something we are also working to increase the automation on. We are also looking to expand the number of devices and browsers that we test on – we cover a good number already and we are looking to up that number.

This year, over £7 million worth of contract opportunities are available for tech entrepreneurs and businesses of any size as…