BlogsDigitalSex and/or gender --- working together to get the question right

Sex and/or gender — working together to get the question right

This is a blog post by Jane Reid, Lead User Researcher at Disclosure Scotland.

When someone applies for a government service, government organisations must only ask questions that are essential.

Government organisations also have to make sure the citizen:

When Disclosure Scotland, an agency of the Scottish Government, was testing their services with users, they found there was more to asking someone’s sex or gender than they realised. They found that the way they were asking the question did not meet the needs of users, and this was an issue other organisations were also having.

So Disclosure Scotland, and the Scottish Government’s Office of the Chief Designer, formed a working group to try to find out when, and how, government organisations should ask about sex or gender.

This is a summary of the group’s initial findings, and a first step towards tackling a complex area, to make services fairer and more inclusive for the people of Scotland. It makes a number of recommendations on next steps, including that the Scottish Government should work towards defining an evidence-based pattern acceptable for use across government.

One of the goals as a user researcher in this process is to help teams make evidence-based decisions. A big part of this is working closely with content designers to ensure content is written with a full understanding of the context of our users.

An evidence-based approach is essential to:

During early discovery research, it became clear that the way in which both Disclosure Scotland and the UK Government ask about sex and/or gender didn’t meet the needs of our trans and non-binary users.

Disclosure Scotland currently asks one question on gender (rather than sex), offering two options – male or female. Early user research and stakeholder engagement flagged up an issue with this. As one participant said, “My granddaughter wouldn’t exist in your eyes, the way that question is worded.”

Disclosure Scotland also spoke to trans and non-binary support groups who said the guidance in the Government Service Manual at that time [the meeting took place on 20 March 2018, in Edinburgh] – which offered three options: ‘male’, ‘female’ or ‘unspecified’ – was not meeting their needs. One trans and non-binary support group said the third option ‘unspecified’ was “blunt and offensive”.

Those attending the workshop came from government departments (from UK and some governments of the devolved nations) as well as third-sector groups who had knowledge of this topic. One participant, for example, came from the Office for National Statistics (ONS) who were also trying to determine the best way to ask these questions as they prepared for the 2021 Census.

Getting buy-in from organisations to take part was easy, which was testimony to the desire to work together.

The organisations which sent representatives to the workshop were:

The research team invited everyone to take part in a sense-making workshop to discuss and review all existing evidence which could be found, specifically:

The research team asked working group attendees to send in all evidence they had that informed existing question patterns they were using, as well any other relevant research they had.

The research team split the participants into two groups, each looking at one of the following:

Each group was asked to review all this evidence [details are available on request] and identify findings relevant to their specific task. 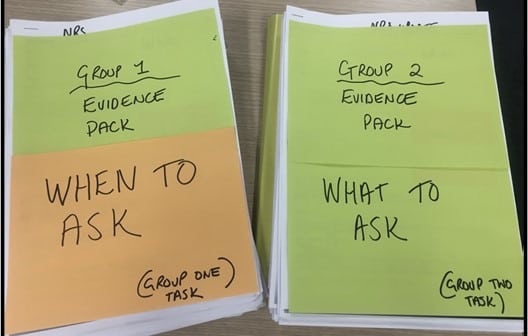 Copies of all evidence for each team

What the research team found 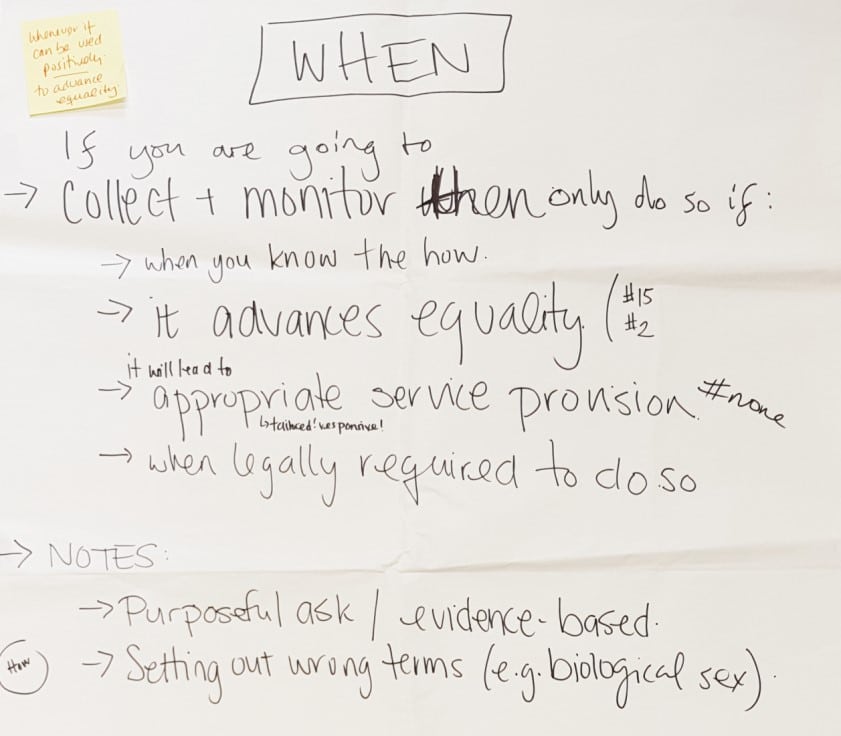 When to ask flipchart 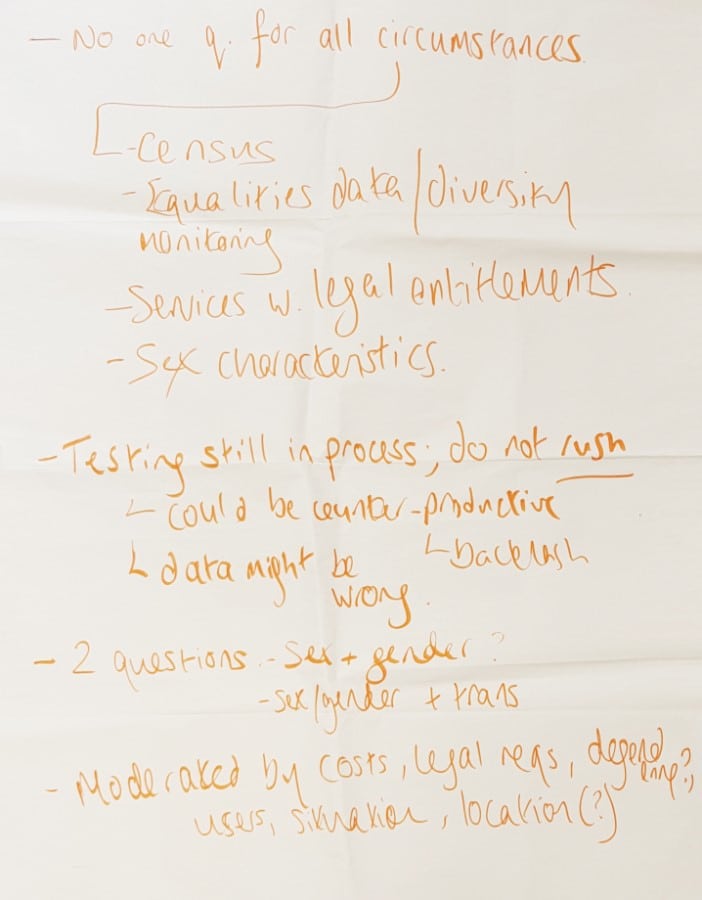 During three hours of open, honest and lively debate, the group identified some broad points which might be worth exploring further, when thinking about ‘when’ and ‘what’ to ask.

Broadly speaking, the group felt the reasons for asking for someone’s sex and/or gender might be:

It was felt that no single question would be sufficient to meet service needs and to collect data for equalities monitoring. What to ask will also depend on the circumstances and what you want to know.

For example, you may want to offer a third option in a sex and/or gender question for non-binary people. Members of the group also thought there might be a need to ask an additional question on whether the respondent is a transgender person (to collect data in order to advance equality).

For example, a transgender man (a person assigned a female gender at birth but who now identifies as male) would mostly likely select ‘male’ in a sex and/or gender question, rather than a third, non-binary option, so this question alone wouldn’t collect data on their transgender status.

Members of the group felt there was as yet insufficient evidence to finalise what to ask for either question. It was noted that important research into the wording of these questions is currently in progress as part of Census development, and decision-making should not pre-empt the completion of this research.

The group agreed that being inclusive doesn’t mean forgetting about users who aren’t transgender or non-binary.

Both the Scottish Trans Alliance (STA) and the Government Equality Office (GEO) felt that it’s better to be inclusive by adding additional options (e.g. adding a Mx title to Mr, Mrs etc.) rather than by degendering everything (e.g. not using titles at all). Scottish Trans Alliance made the point that some trans people can get just as annoyed as non-trans people by degendering because they’ve gone to great lengths to change their gender markers.

The following considerations were raised by various attendees during the workshop:

In 2016, the Women and Equalities Select Committee inquiry into transgender equality made over 30 recommendations in a wide range of policy areas. It called on the UK Government to take action to ensure full equality for trans people, emphasising the need to:

In July 2017, the GEO announced their intention to reform the Gender Recognition Act in July 2017, ahead of the 50th anniversary of the partial decriminalisation of homosexuality. Minister for Women and Equalities at the time, Justine Greening, said:

“This government is committed to building an inclusive society that works for everyone, no matter what their gender or sexuality and today we’re taking the next step forward.

“We will build on the significant progress we have made over the past 50 years, tackling some of the historic prejudices that still persist in our laws and giving LGBT people a real say on the issues affecting them.”

The UK Government consultation will take a broad and open approach, and will invite opinions on a wide range of elements concerning the Gender Recognition Act 2004.

Scottish Government are currently analysing the responses to their consultation on the Gender Recognition Act. Discussions are ongoing, so the final policy is still to be firmed up.

Part 7 of the review of the Gender Recognition Act sets out the options being considered regarding non-binary people.

From 2018, the Scottish Household Survey has a third gender option, ie:

Disclosure Scotland believes that there is a need for a new pattern for the question and guidance for a new, more inclusive way of asking about sex and/or gender.

However, there’s currently insufficient evidence to determine exactly what the best new pattern for a question and guidance would be.

It’s a complicated issue. As well as the lack of evidence for a new pattern, we also need a clearer picture of the legal and policy situations in UK Government and in each of the governments of the devolved nations. This also will mean exploring the situation in the Northern Ireland Executive further.

While there remains insufficient evidence to determine a new pattern/guidance, Disclosure Scotland recommends the following next steps: