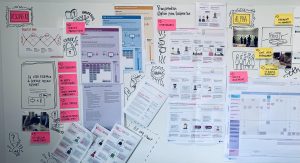 Planning the payments project on our office walls. Since the pandemic the team have had to adapt to delivering the service while working at home.

Hugh Wallace, Service Owner, Digital Directorate, talks about the build up to a significant milestone for Scottish Government’s payments service.

It feels like a timely moment to be writing about Scottish Government’s payments service. It was almost three years ago to the day when a small team – just four of us at the time – started to get our heads around what a new service that processes payments could mean for the public sector in Scotland.

The principle has always been relatively simple: in Scotland (and as we soon discovered, in countries all over the world), there are a multitude of ways in which money is paid out and received by central and local government, and other public sector organisations. This leads to lots of duplication and inefficiency: many people undertaking similar sets of tasks; inconsistent ways of carrying out standard processes; and multiple overlaps in software and the infrastructure to support it. Not only does this increase costs, it also takes staff away from other important work and poses increased risks in terms of security and reliance on legacy systems.

Building on a platform and components initiative that was already taking shape in the Scottish Government’s Digital Strategy, we set about finding out what a centralised payments function could look like for Scotland. This meant developing a deep understanding of the opportunities, challenges and pain points, through talking to users and getting to grips with underlying technologies and business operations.

On the back of this we produced a business case to highlight the benefits of creating a flexible, modern platform based on genuine business and user needs. It’s been important that we’ve continued to update the case as we’ve progressed – nothing stands still for long in the digital world. We’ve had to keep on top of changes to legislation, banking technology, and how different organisations’ needs have evolved. So a big learning has been the requirement to iterate our business case development alongside the software we’re deploying. While much has changed since the project began, we are still seeing a real need for our service to support the future of payments across the public sector

Fast forward to now, and we’re on the cusp of making our first payments to citizens using the service that’s been designed, built and repeatedly tested in the intervening period – a hugely exciting moment for the whole team, and a major delivery milestone. To get here, the project has moved through various stages, advancing via an agile approach to complete its discovery and alpha phases, and undertaking a number of assurance activities to ensure we’re delivering things in the right way.

If the overall proposition is relatively simple, the execution hasn’t always been. One of the big reflections is just how demanding digital transformation can be, and the fact it touches on so many areas – from the culture and strategic aims of an organisation to the very specific sets of tasks people carry out day to day. While technology is obviously core to what we’re delivering, some of the more intricate challenges have been around how we successfully land our service in organisations whilst avoiding disruption to their teams and processes.

There’s lots more to contemplate and consider as we make the final preparations for our first payment run, and we’ll be blogging again about some of our takeaways once we’ve had the chance to evaluate – watch this space…