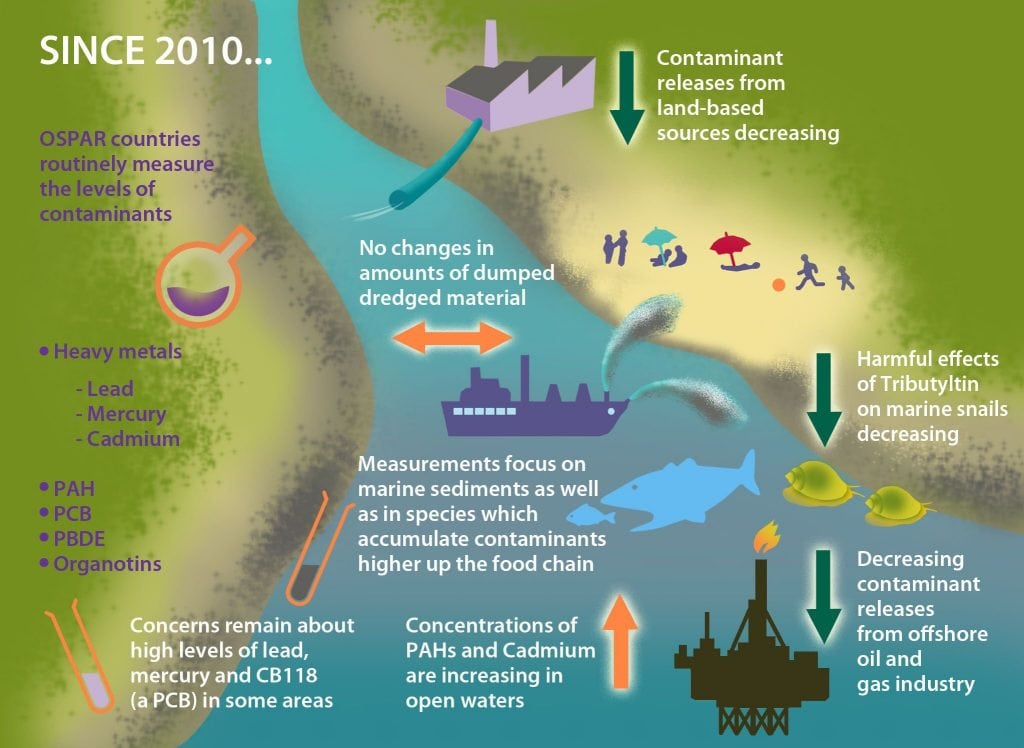 OSPAR countries have made significant efforts to reduce discharges, emissions, and losses of contaminants to both air and water. The effect of these efforts is clearly visible in reduced inputs to the Greater North Sea. The observed decreases in contaminant release from land-based sources and the offshore oil and gas industry show the continued progress since the last OSPAR Quality Status Report (QSR 2010). However, no changes have been detected in the amounts of dumped dredged material and associated contaminant loads to the OSPAR Maritime Area since the QSR 2010.

To assess progress towards the objectives of the North-East Atlantic Environment Strategy, OSPAR countries routinely measure levels of contaminants in the OSPAR Maritime Area: heavy metals (mercury, cadmium, and lead), polycyclic aromatic hydrocarbons (PAHs), organotins and synthetic substances such as polychlorinated biphenyls (PCBs) and polybrominated diphenyl ethers (PBDEs). The selected contaminants are persistent, bioaccumulative and toxic, and will remain in the environment for many decades. Measurements focus on marine sediments and on organisms in which these contaminants tend to accumulate or through which they biomagnify up the food chain.

Since the QSR 2010, contaminant concentrations have continued to decrease in the majority of areas assessed, especially for PCBs. Although concentrations are generally below levels likely to harm marine species in the areas assessed, they mostly have not yet reduced to background levels (where these are specified). Concerns remain in some localised areas with respect to high levels of mercury, lead, and CB118 (one of the most toxic PCB congeners) and locally increasing concentrations of PAHs and cadmium in open waters.

Most OSPAR countries have opted to monitor the biological effects of organotin pollution, rather than tributyltin itself. The harmful effects of tributyltin on marine snails have continued to decrease markedly due to global action taken to ban or restrict its use in antifouling paints for ships.

Prev Madeira. It’s not all about cake.
Next Modelling the future – and the past