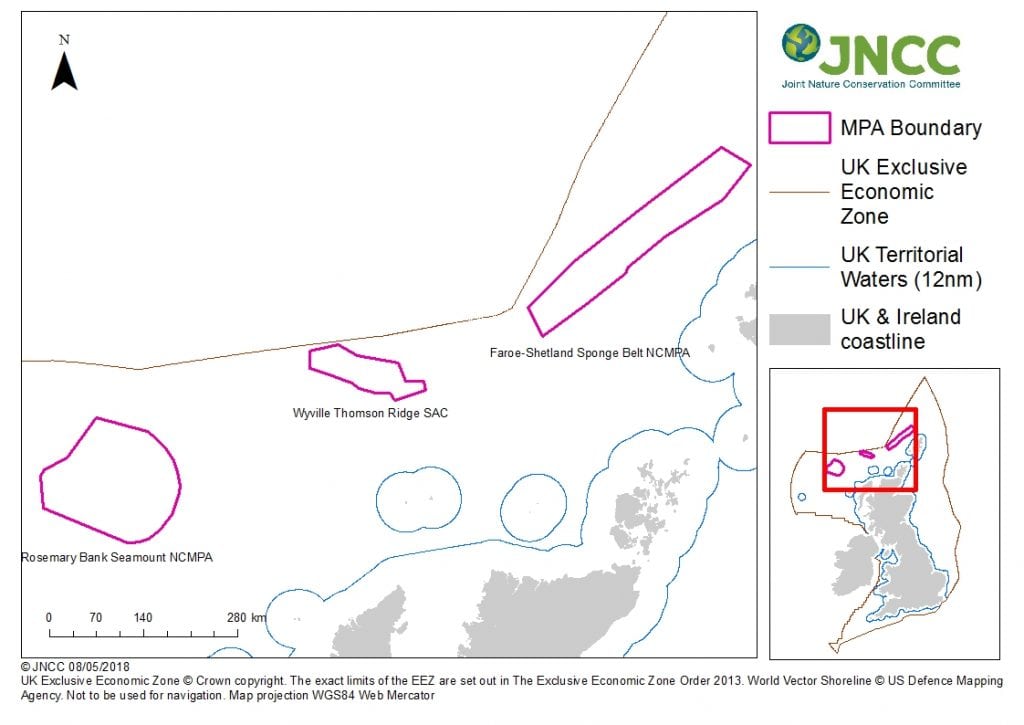 5. Update demersal trawl time series on RB on historical stations between 600-1100 m depth plus another at 2100 m, time permitting. 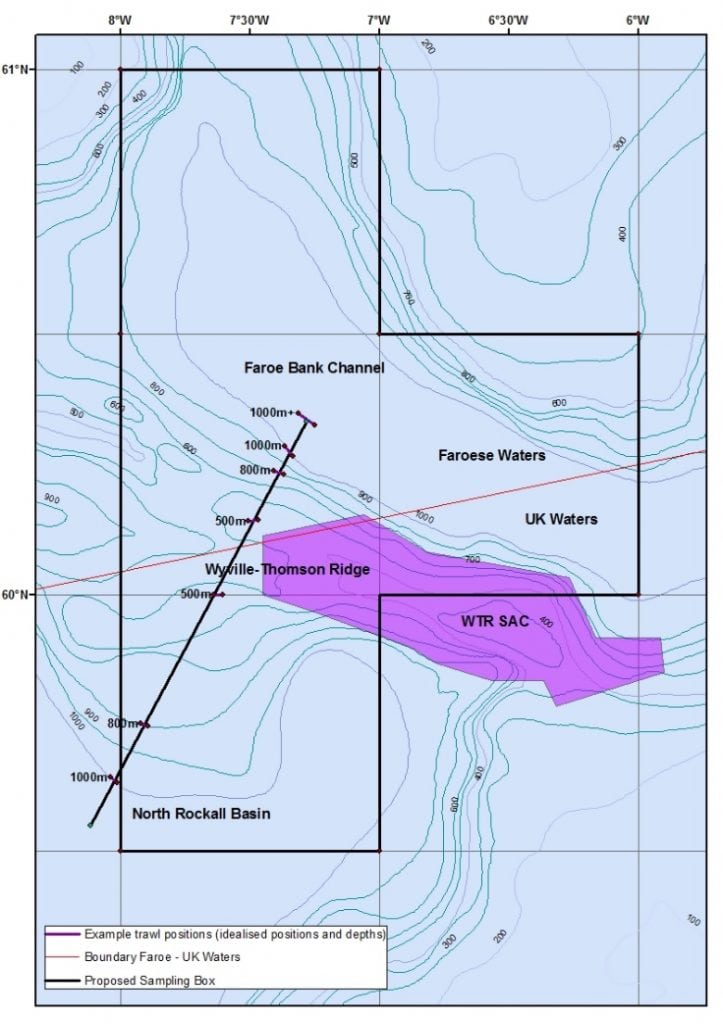 7. Measure rate and direction of long-term change (type one monitoring) using drop-frame fitted with high definition cameras.
8. Scope out and undertake a series of depth stratified trawls on suitable grounds to the west of the SAC taking in the North Rockall Basin, Wyville Tomson Ridge and Faroe-Bank Channel.

The survey will consist of two legs:

Objectives 1, 4 and 7: In the FSSB the first TV transects will be made with the chariot. These will consist of 9 km runs; perpendicular to the depth contours within the 400-600 m depth range (where the sponges are expected to occur) to ascertain distribution and extent of the feature. A further set of 200 m runs will be made with the drop-frame, during the second leg, to provide high definition footage for species and density analysis.

At RB the chariot will again be used to clarify the distribution and extent of the sponge feature on the northern and southern slopes. Time permitting, other seamount communities may be targeted with the chariot. A further set of 200 m drop-frame runs will be made at the site of the 2014 ‘MoreDeep’ visual survey on the eastern slope of RB for high definition footage as above.

At WTR where this work is a continuation from that already achieved during cruise 1517S last year this objective will be met by 200 m drop-frame runs only.

Objectives 2, 5 and 8: Demersal trawl data will be used as baselines to assess the future status of the protected area. All demersal trawls will be away from sponge aggregations and other Vulnerable Marine Ecosystem (VME) habitats. Trawling will take place on stations in Faroe-Shetland Channel over a depth range of 300-1500 m. These will mainly be outside FSSB. However, two (providing times-series data) are inside. These are deliberately placed well away from the spongebelt and have historically negligible bycatch of VME indicator species.

At RB, demersal trawling will take the form of historical fixed stations which provide important time-series data and which again have historically demonstrated little or no VME bycatch. A potential new site to begin a depth-stratified time-series data will be sought out to the west of WTR; this will include hauls on suitable sediments in the Faroe-Bank Channel (Faroese waters), Wyville-Tomson Ridge, and North Rockall Basin. Map 2 shows an idealised version of how these trawl sites may look. Reality will depend on what sites are available to trawl.

All demersal haul durations are expected to be a maximum of 30 minutes. The ground-gear net will be attached and deployed on an opportunistic basis during demersal trawling to obtain samples of the invertebrates.

Objectives 3 and 6: Short (nominally three minute) hauls with 2 m Agassiz trawl will be undertaken in FSSB and RB to obtain samples of the sponge community. Trawls will be away from areas of type one monitoring.

A summary of expected demersal and Agassiz trawl deployments is presented in Table 1.

During leg 1 the Aquatracker and large Van Veen Grab will be deployed on an opportunistic basis.

Prev Come on in; our Doors are (nearly) Open!
Next Deploying fish traps and underwater video camera frames