The vessel will be loaded from Ullapool late on the morning of 1 July and during the afternoon will proceed down through the Minch towards the first plankton stations west of Barra Head at 56o45N in time for early morning on 2 July.  Ideally, plankton stations will be taken west along the line until zero eggs are found and from there the vessel will continue surveying to the south.  This Period 7 survey represents the final survey in the 2019 schedule and will attempt to cover the whole of the spawning area for both mackerel and horse mackerel.  This is an extremely challenging task and as such the main priority will be to ensure that the remaining concentrations of spawning are sampled adequately.  Its extent will, therefore, be largely determined by the observed findings of the three vessels surveying in Period 6.  Figure 1 represents the area surveyed during this temporal period in 2016 and is likely to reflect pretty closely the area that will be covered during the forthcoming survey although just to reiterate the actual extent (longitudinal as well as latitudinal) will be dictated by the results received from the previous survey period that is currently being undertaken. Once these have been received a definite survey plan will be drafted that will aim to capture the bulk of any remaining spawning activity and within the time allocated to MSS for this survey.  Due to the size of the area latitudinal transect spacing will almost certainly be at 1o intervals with stations being sampled at 30′ intervals on the E/W transects normally at the 15’ and 45’.  Plankton stations will be taken using the Gulf VII sampler with mounted CTD which will record salinity and temperature during the tow.  The plankton stations will require the vessel to deploy the sampler at and maintain a speed of four knots.  The sampler will then be lowered at a steady rate (6m/min) from the plankton crane to within 5 m of the seabed or 200 m – whichever is shallower.  The sampler will then be recovered at the same speed.  Once aboard, plankton samples will be washed from the sampler net, fixed in formalin and scored for egg abundance.  Trawl samples will be taken at the discretion of the scientist in charge.  There should be a maximum of ten trawls for the whole survey, and will usually be taken on the continental shelf or near the shelf edge.

After completing the southernmost transects of the survey area Altaire will put in for a mid-survey break most likely in either Cork or Falmouth around 13/14 July.  Altaire will then proceed north and west to complete the remaining survey transects before returning to Ullapool for unloading on the morning of 23 July 2019.  All of the sampling gear as well as the samplers, sampling container and wire for deploying the sampler will also be unloaded and returned back to Aberdeen. 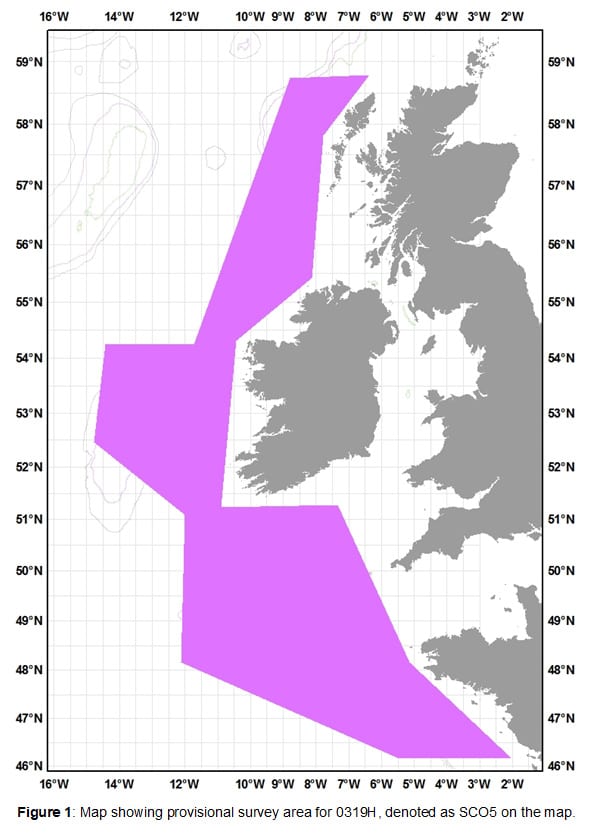