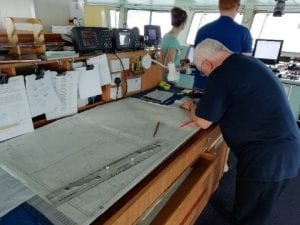 Charting a course to the Scanner SAC

It is 0300 in the morning and the MRV Scotia is steaming to the eastern section of the Fladen ground, in the central North Sea. We have received the go-ahead to run a short survey over the giant Scanner and Scotia pockmark complexes. These large conical shaped depressions found occasionally in the North Sea and on the seabed around western Scotland form through the release of gas produced within organic rich sediments or deeper hydrocarbon stores. They represent an important pathway for the cycling of carbon from the seabed to the ocean – sometimes known as ‘blue carbon’. These particular pockmarks are some of the largest within Europe and have been sporadically studied, since being discovered in 1983. But are they still actively releasing gas? This region has been designated by the European Commission as a Special Area of Conservation due to these gas seepage structures, of unknown age, and the presence of rare Methane Derived Authigenic Carbonate (MDAC). Very few marine sites are recognised at this level on the basis of their geological significance.

The ship carefully cruises over the Scanner pockmark at half speed, five knots. Within one of the containers on the hangar deck that serves as our lab, we observe the precise shape of the seabed.  The screen shows live data from the ship’s single-beam echosounder – acoustic reflections from the seabed and within the water column. Typically these include fish, clouds of plankton, turbulence from the ships thrusters, and bubble plumes. The Scanner pockmark looms into view, its profile clearly visible as a pronounced depression on the seabed – but there is no trace of any unusual acoustic signals within the water column, no sign of any gas. As the ship maintains its course north towards Scotia pockmark, over the flat ground of the North Sea, tension grows as I eagerly hope for any signs of activity. The data on the screen moves painfully slowly – each second seemingly longer than the last. Then the depths begin to increase. One hundred and fifty metres, one hundred and fifty one, one hundred and fifty two – this must be Scotia. And there, projecting like an ‘acoustic pillar’ on the seabed, is the clear signature that can only be associated with gas erupting from the seabed. A 50-m high, flame-shaped cone on the echogram, like nothing else we had seen on the cruise, originating from the pockmark. “That’s it. It has to be. It’s gas. It’s still active!” I exclaim. “Are you seeing this?!”, Tom Bradwell, my supervisor, says as he comes smiling into the lab – having just watched the same footage from the bridge. We take a few more phone pictures of the plume and do some celebratory backslapping before the hard work begins. 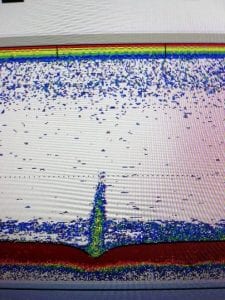 We have been given permission to sample the seabed within the Scotia pockmark, onboard the MRV Scotia, providing we do not disturb any of the rare MDACs. First we lower the CTD on a cable to measure the physical properties of the seawater five metres above the pockmark and collect a sample – to be later analysed for methane content. Then we carefully lower a multi-corer rig with a HD video camera and lights attached. The beaming light slowly descends into the darkness of the sea. Its eerie glow like the lights of captain Nemo’s Nautilus in 20,000 leagues under the sea. Once safely recovered, we excitedly look at the footage. The video shows no MDAC within this locality, and no clear signs of bubbles, but there seem to be unusually strong bottom currents as sediment particles flow hypnotically across the screen. With no signs of precious MDAC, the gravity corer is prepared and dropped in exactly the same location – using the ship’s precise dynamic positioning thrusters to full effect. The gravity corer, a 3-m long metal pipe with a lead weight, weighing over a tonne, collects a sediment core from the deepest part of Scotia pockmark. As it is brought back on deck, I immediately remove the core liner to see what has been collected. The muddy sediment is dense, sticky and yet doesn’t really smell; I would have expected a gas-rich core to smell sulphurous or eggy. We cap the core, measure its length and store it away. The Scotia does a second pass with the echosounder, this time perpendicular to the previous track. The results again show a clear gas flare billowing from the centre of the pockmark. There is no doubt that the Scotia pockmark is actively venting gas! It remains to be seen what the sediment core will show. 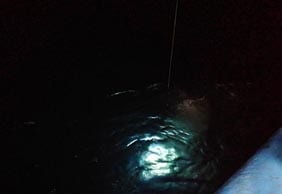 The lights of the multi-corer being lowered into the sea

Before the cruise, we knew that these giant pockmarks existed, we had their exact coordinates – and yet tonight’s discovery of active venting feels like a real discovery – real exploratory science. I’m sure that this late-night experience will stay with me, echoing throughout my PhD research and perhaps beyond. It’s this deep sense of exploration and adventure miles out at sea that is pushing me further into my academic research in the search for answers. What is the history and formation mechanism of the giant Scotia pockmark and others like it? How much gas does it produce and what is its fate? And how does it impact life on the seafloor? Answering these questions will shed light on the complex carbon cycling process currently ongoing from seafloor to ocean and atmosphere. Until then, I would like to thank the crew of the MRV Scotia, my colleagues on the ‘Blue Carbon 2019’ cruise and Marine Scotland for making such an endeavour possible.