The primary objective of this survey is to assess the state of the haddock stock on the Rockall Plateau. The Rockall haddock survey utilises a semi-random stratified survey design comprising four depth-separated sampling strata. Sampling intensity within each of the four strata reflects the fish density observed in each of these during previous surveys.

Trawling will be carried out during the hours of daylight at randomly selected locations within the 350 m contour. Forty primary tow positions have been generated and their allocation within each depth stratum is displayed in Figure 1.

The number of primary stations within each depth strata is as follows: five stations at 0-150 m, 21 stations at 150-200 m, 10 stations at 200-250 m and four stations at 250-350 m. Scotia will undertake a trawl haul within five miles of each station position where possible or, failing that, choose an alternative.

The minimum spacing between trawl locations is set at 7nm. A further 22 secondary stations across the various strata have been generated to provide a source of additional stations and/or alternatives should any primary station prove unfishable.

Where time allows additional hauls will be conducted outside the existing strata (R1-R4) in depths between 350-500 m. This is a periodic check that is undertaken to test the current depth boundary at 350 m (see Figure 1).

One haul of 30 minutes duration will be made at each sampling station. Daily start times will vary depending on available daylight. The SCANMAR system will be used to monitor the headline height, wing spread and door spread for each haul. Bottom contact data from each trawl will also be collected using the NOAA bottom contact sensor which will be mounted on a bar in the centre of the ground-gear.

In addition to the routine sampling, biological data will be collected for target species in line with the EU data regulation.

All fish will be processed in accordance with the protocols as described in the Manual of the IBTS (International Bottom Trawl Survey) North Eastern Atlantic Surveys. Series of ICES (International Council for the Exploration of the Seas) Survey Protocols SISP 15. 92 pp. http://doi.org/10.17895/ices.pub.3519.

During trawl downtime at night, Scotia will take sediment samples using a Van Veen Grab. The sampling positions for the grabs will be confirmed on a day to day basis and will be influenced by vessel location at the end of each trawling period.

Regular planning meetings with the fishing master and captain will take place during the survey and will be scheduled at a time that is mutually convenient to all those concerned. 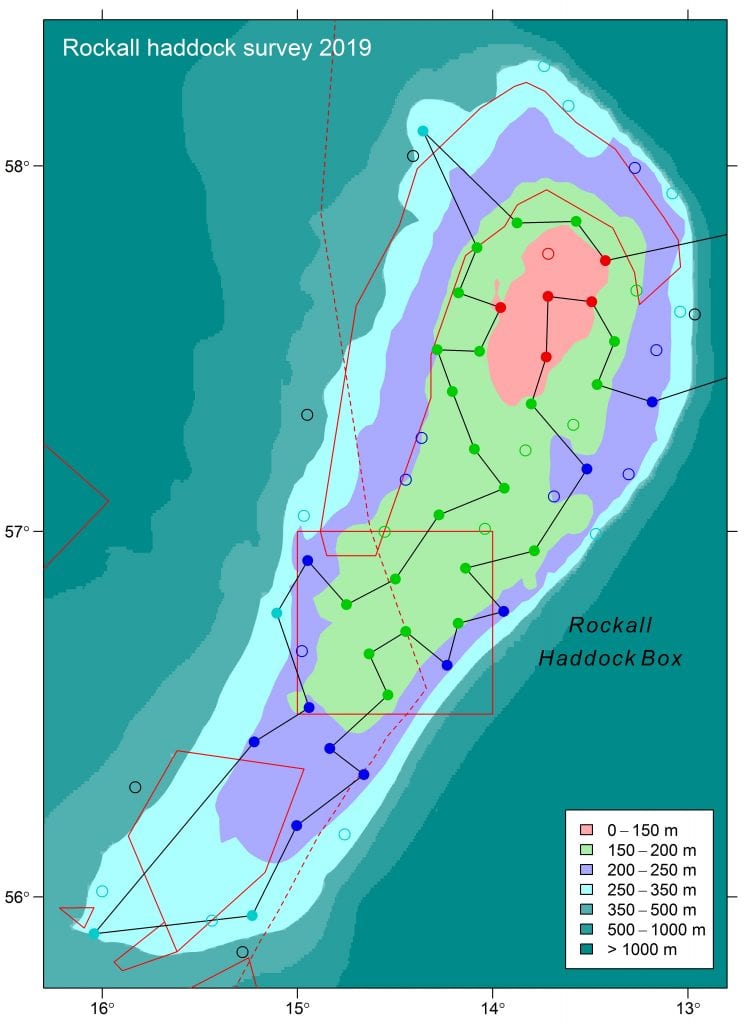 Prev Half-way there! Monitoring the West Shetland Shelf
Next Skate Research: Survey in the Loch Sunart to the Sound of Jura MPA