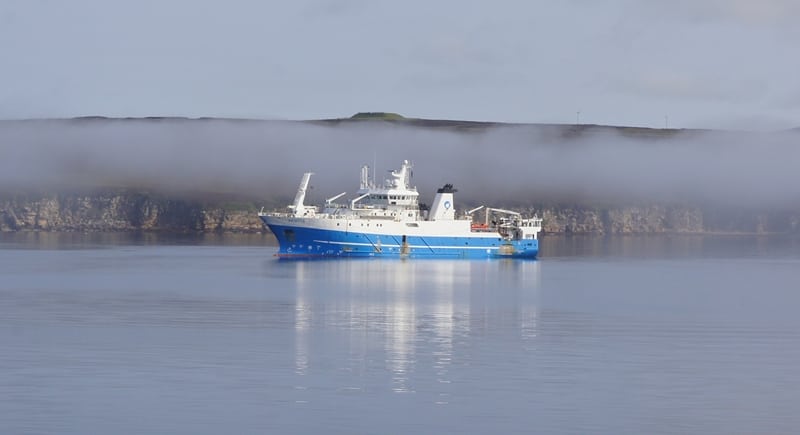 (Times given are in Coordinated Universal Time (abbreviated to UTC), 24-hour format throughout.)

With a full complement of staff aboard, including 19 officers and crew and a team of 11 scientists from Marine Scotland Science (MSS), the Joint Nature Conservation Committee (JNCC) and the National Museum of Scotland, MRV Scotia departed Aberdeen on the morning of 26th August and made way for the West Shetland Shelf (WSS) Nature Conservation Marine Protected Area (MPA) (Fig. 1). The 1219S WSS offshore monitoring survey had begun with high expectations after the discovery made during the last visit.

Upon leaving port, a vessel familiarisation tour was conducted for those scientific staff who were new to the boat, or who hadn’t sailed in the preceding six months. An abandon ship drill was also carried out.  A ‘wet-test’ of sampling equipment was carried out between 12:30 and 15:30 on the 26th August, 25 km north of Fraserburgh (Fig. 1). This included a test of:

Once testing was completed, transiting resumed and we arrived at survey box B in the WSS MPA (Fig 1) at 03:00 hours on the 27th August. A sound velocity profile (SVP) cast was taken (SVPs are used to calibrate the multibeam echosounder (MBES) system on board) and an MBES survey of box B began and continued until first light on the 27th. Boxes B and D are the primary targets for MBES sampling due to the coarser sediment in these areas, you can read JNCC’s blog post about MBES on 1219S here. At first light (06:00) – to allow sight of any creel marker buoys that present a snagging risk to towed gear – the drop-camera survey of stations within box B commenced and continued until 10:00 after which the MBES survey of box B resumed and continued until midnight on the 27th August.

We then transited to survey box A and undertook drop-camera sampling until 10:30 on the 28th, at which point Hamon grab sampling began and continued until midnight. Many thanks are due to MRV Scotia’s engineering crew for their work in adapting the Hamon grab; a retaining bar was installed to keep the lifting wire on the pulley as this had been slipping out while retrieving the grab. Sampling of box A was completed on the 29th August (drop-camera: 00:00 – 09:30, Hamon grab: 09:30 – 12:45).

We then set our sights on box F, arriving at 14:00 and grab sampled until 17:30 when high winds and rough seas prevented equipment from being deployed and retrieved safely. This period of downtime lasted approximately 15 hours, with grab sampling in box F resuming at 09:00 on the 30th August until midnight when grab sampling of this area was completed.

Drop-camera sampling of box F began and continued until completed at 09:00 on 31st August. Transit back to box B was made and the MBES survey here resumed at 12:30 until completed at 23:15. Note the different shape of box B presented here to that given in the survey programme: it was necessary to adapt the shape due to the presence of creels in the south of the survey box.

Drop-camera sampling of box B continued from 23:15 (31st August) to 03:30 on the 1st September when the weather worsened making the drop-camera unworkable. Transit to box D was made and MBES surveying commenced at 06:45, continuing to 10:00, when sea state affected the quality of the acoustic data to an unacceptable extent and all scientific operations ceased. The MBES survey of box D resumed at 14:00 and lasted until 21:30 on the 31st, when sea state had improved sufficiently. With conditions continuing to improve, transit back to box B to complete drop-camera and grab sampling was made, with all sampling in box B completed by 14:00 on the 2nd September.

Good progress is being made with three boxes fully completed and two others started. Despite the weather forecast, the team is optimistic the survey objectives will be achieved.

The catering staff are keeping spirits high with excellent fayre, while both the officers and deck team are making sure we are on-target, safe and entertained.