Harmful algal blooms (HABs) present a problem for marine ecosystems, associated industries and societies across the world, including Scotland. HABs are formed when certain species of single-celled phytoplankton (microscopic, free-floating organisms that are able to photosynthesize) increase in cell numbers during favourable environmental conditions.

HABs can have a number of different impacts. Some phytoplankton species produce toxins that can accumulate in the flesh of shellfish which feed on them. These shellfish can pose a risk to human health if consumed. Some form high biomass blooms that can smother animals on the seabed when the bloom dies off. Others produce toxins that can kill fish. Not all blooms are, however, harmful, and may only produce water discolourations, scums and foams which, whilst unsightly, are benign.

The majority of phytoplankton species in the oceans form blooms that have no negative impact. In fact, phytoplankton blooms play an important role in the marine food web. The Scottish aquaculture industry experiences impacts from HABs annually, the most frequent being closures of harvesting areas due to algal toxins in shellfish flesh exceeding EU regulatory levels.

The Intergovernmental Oceanographic Commission (IOC) of UNESCO recently published the first Global HAB Status Report (GHSR). The IOC HAB Programme conducted a study involving 109 scientists from 35 countries who interpreted data gathered from 1985 to 2018. Their task was to detect changes in the distribution, frequency, and intensity of these naturally occurring phenomena, looking for global trends. Marine Scotland was one of the contributors. 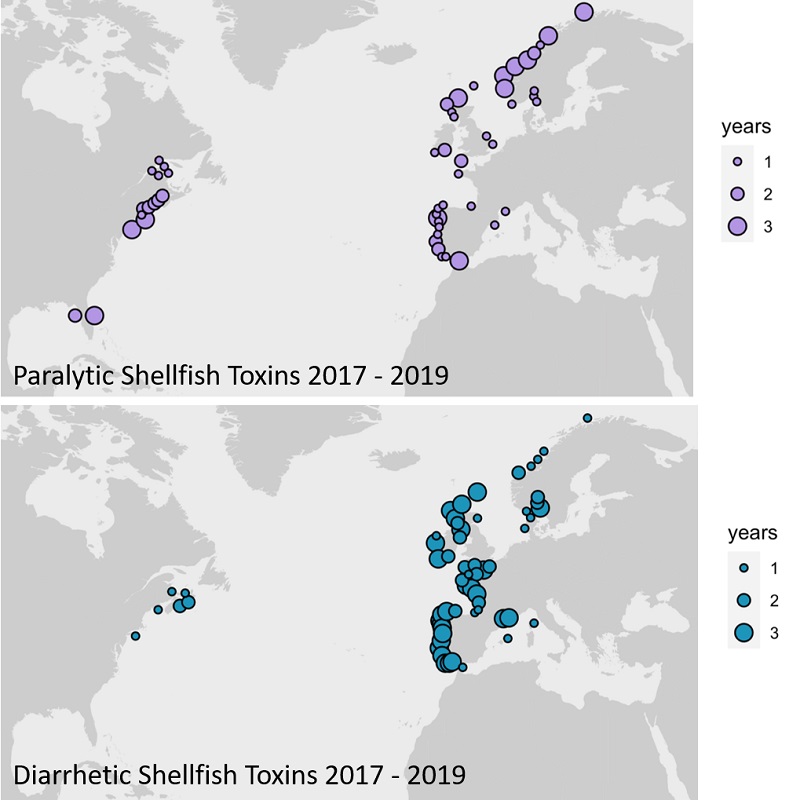 The study found that reported HAB events have increased in some regions and decreased or stabilised in other regions of the globe. Within Europe there has been no significant change in HAB events once higher levels of monitoring effort have been accounted for. This variability in regional trends is driven in part by differences in HAB species and impacts that are observed in different parts of the world. Emergent impacts in some regions have also contributed to this variability.

The often stated view that HABs are on the rise throughout the world was not confirmed by the study. Regional assessments indicate that intensified monitoring efforts, associated with both increased aquaculture production and tourism, could be responsible for the perceived increase in harmful algal events. The study also highlighted that trends in HAB events need to be considered regionally, and at the species level, if drivers are to be better understood.

A special issue of the journal Harmful Algae, published in February for the GHSR, contains regional overviews of HAB events from around the world.