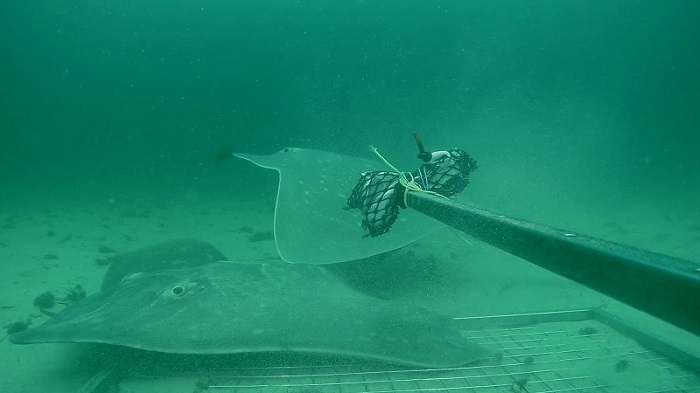 This week is Shark Week and today we’re celebrating Shark Awareness Day. Did you know that there are over 30 species of sharks, skates and rays recorded in Scottish waters?

Sharks are part of the elasmobranch family, which also includes skates and rays. They differ from other fish in the sea by having a skeletal structure made out of cartilage as opposed to bone.

The flapper skate is the largest and most endangered skate species in the North East Atlantic but very little is known about its lifecycle and, to add to the confusion, until recently the blue skate and flapper skate were considered a single species.

Its large size makes it vulnerable to fishing gear throughout most of its life-cycle. As a result of its rapid decline and near eradication from areas where it was previously found in large numbers, the conservation status of the flapper skate was changed to ‘Critically Endangered’, meaning it was seen as a species very likely to become extinct in the near future.

On 10 March 2021 Scottish Ministers designated an urgent Marine Protected Area (MPA) for flapper skate in the Inner Sound of Skye, following the discovery of the first flapper skate nursery area in Scotland. This is the second MPA to protect flapper skate in Scotland. The Loch Sunart to the Sound of Jura Marine Protected Area was designated in 2014 to protect populations found there but to assess the impact of the management measures put in place to protect this iconic species requires knowledge and baseline information of age, growth and maturation.

A study led by our science colleagues to explore non-invasive ways to obtain valuable data about the critically endangered flapper skate concluded recently and the findings have now been published.

Using data from a long-term conventional tagging programme already in place in the area and using photo-identification to match unique spot patterns for nearly three years, the team were able to model growth for 626 flapper skate individuals and provide the much needed age and growth estimates.

Therefore, the study confirms the importance of protecting long-lived and slow growing flapper skate so that sufficient numbers of fish mature and reproduce, to combat the decline observed in the last decades.