It was for this last reason that I (Philip Whitley) was part of a delegation from the Scottish Government’s Digital Directorate that visited Tallinn recently. “Estonia” is fast becoming shorthand for excellence in digitally enabled public services, and our observations supported this. 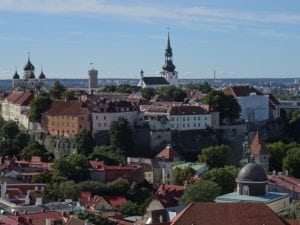 A modern country with a proud history

It was clear that much of this was driven by necessity borne out of the collapse of the Soviet Union. Following independence in 1991 Estonia had no legislation and very little capital. They quite literally started from scratch.

They had no legacy systems or ingrained approaches, and took the enlightened decision, in the 1990’s to build integrated digital public services, and invest in broadband connectivity. And they have pursued this strategy consistently ever since, with impressive results. But Estonians are the first to say that their model should not be adopted wholesale – this is particularly relevant, in our case, given their reliance on mandatory ID cards.

There is, however, a significant amount we can learn from Estonia in their approach to leadership and engagement in the digital agenda.

The key to their success is transparency and trust. No single Government organisation holds every piece of information about any one citizen, and only the Citizen can see all the personal information held on them (and, by law, that information is owned by them, not the service provider). This limits the power of individual organisations who share information as required via a peer-to-peer system (‘X-Road’). This is supported by comprehensive legislation governing when and how they can share data. Citizens also have the ability to view who has accessed their data, and in some cases set levels of access. They link this to a very high level of trust in the government in Estonia (for example a higher trust level then the established Church) and eradicates some of the barriers between citizens and traditional government. 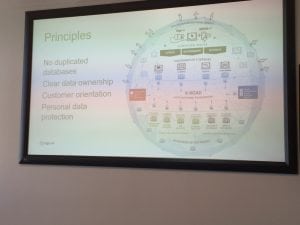 E-Estonia on one slide- principles and architecture

As we discovered this has led to some spectacular successes. For example 97% of citizens now interact with the tax and customs agency on-line, and the country spends 60% less than the UK for every €100 of tax collected. The justice system too offers an end-to-end paperless court system with twenty four hour on-line access for all participants. For simple cases all proceedings are virtual and Estonia now holds second place in Europe regarding speed of court proceedings.

If the principles of Estonian digital government can be distilled they would look something like this:

• Public trust in organisations to use accurate, high-quality data appropriately is paramount.
• Policy makers should be bold and ambitious when designing services –and they should take the holistic view of the wider causes of problems and how these can be solved.
• The tangible benefits of services should always be demonstrated to get people on side (the use of digital signatures for example has been estimated to save 2% of Estonian GDP).
• Radical reforms need buy-in from the top, with acknowledgement that time is needed to implement them effectively (the Social Insurance Agency is about to embark upon a period of significant transformation – all stakeholders acknowledge that it will take between three and five years simply to get the basic structure in place). This certainly chimes well with the approach we are taking to implementation of the devolved Social Security powers.

In many respects the visit underlined in practice what we already know- that digital enablement is a means to an end, rather than the end in itself, and the user must be at the heart of everything. Digital undoubtedly offers fantastic opportunities to offer high quality easy to use services that meet the requirements of all users, but in the words of Siim Sikutt, Digital Advisor to the Estonian Prime Minister’s Office: “…the key is not technology itself, it’s the culture…” if you get this right – from staff and policy makers, through to politicians – then you are well on the road to success.

We made some great contacts in our time there including people from the e-governance academy, who will soon be visiting Scotland to continue the dialogue, and we look forward to sharing ideas.

To find out more about Estonia’s digital revolution visit https://e-estonia.com/ 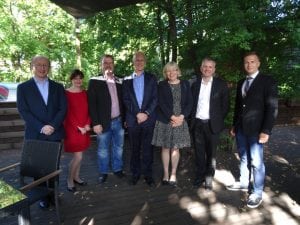 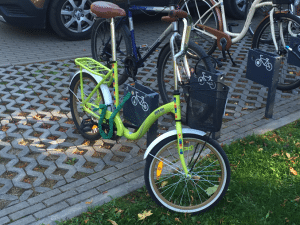 This bike looks harmless enough, but nearly killed the director of Digital Directorate (Mike Neilson) – he couldn’t find the brakes and only realised just in time that you have to pedal backwards.