BlogsDigitalPop-up Study – Taking research to where our users are

Pop-up Study – Taking research to where our users are 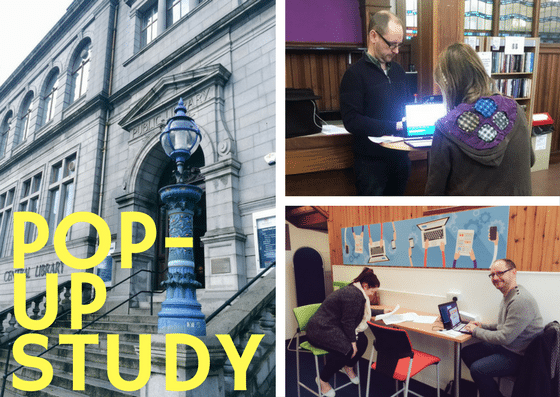 This is a blog post by Sam Tilston, one of our user researchers.

Pop-ups are a quick and direct user research method. They allow us to take our questions to a wider range of potential users, taking us to where they are, rather than bringing them to the lab. It’s less formal than traditional usability testing and is a quick way of engaging with a relatively high number of people.

You can use pop-up research to:

Pop-ups are typically conducted at libraries, community centres, shopping centres, and cafes, or can be carried out at places where government agencies and organisations offer services or support.

We decided on libraries as a starting point. We initially went to Leith Library as a pilot to test our questions and iron out the logistics e.g. the practicalities of how and where we would set up. We then went to Aberdeen Central Library and Galashiels Library, which also illustrates the value of pop-ups in allowing us to better expand our coverage outside the Central Belt.

As well as gaining answers to our questions, observing people interacting in the space gave us additional insights. Taking out books is obviously the primary reason for visiting a library, but accessing a computer and the internet was a common activity for people.

We went in with three broad questions to investigate How do people expect to engage with government online? This question had surfaced from previous research/testing and needed further exploration. Going back to this high-level outlook can be refreshing after focusing on the detail of content and interactions.

Tell me about your online experience?

The first question set out to capture the participants’ online experience and confidence levels, which highlighted a mixed and varied demographic. There was a leaning towards the older generation, although confidence online was surprisingly high. However, there were still several people we spoke with who had limited (or no) experience online.

Additionally, from speaking with the librarians informally, their customers are generally from lower socioeconomic groups, which are more likely to require assistance when accessing government services.

We saw as many people going to the libraries to use a computer and access the internet as we did for traditional reading and lending and it showed the change in emphasis of how people see libraries. Libraries have become more like internet cafés in some cases and are not just for books. The librarians we spoke to often end up supporting many people with tasks e.g. scanning, email accounts, printing forms, etc. Also, libraries can act as community hubs and are often simply a place for social contact.

What does the term public services mean to you?

Our second question was to ask what the term “public services” meant to them. We followed up by asking for examples of public services.

The most popular examples provided were:

*Potentially higher due to being in a library

The focus is on local service; people relate public services to what they know and what’s relevant and tangible to them – often local services that their local council provides. Generally, people were correct with their examples.

What does the Scottish Government provide?

Our third question was to explore people’s expectations/perception on the difference between ‘government’ and ‘public services’. The respondents had more difficulty answering this question (12 out of 31 of the people we asked struggled to come up with a definition).

From those who gave an answer, their explanations were categorised into these themes:

We also collected quick reactions to mygov.scot. The key thing to us is that people said that the site “looks good for when I might need this”. It’s not necessarily about promoting or advertising the site, but making sure users can find it when they have a relevant task which requires the use of the site. We do this by understanding the terms users search for, the context in which they’re doing so and the needs they have.

We’ll be looking at other opportunities to use pop-ups in 2017, most likely with specific and focused aspects of the mygov.scot site such as short content items or small components of design changes.

Keep up to date by following our updates on this blog and on Twitter.