Getting to know the Herring and Sprat

The vessel will depart Aberdeen and make passage to Scapa Flow, Orkney Islands, where calibration of all echosounders will take place (approximately 8-12 hours at anchor).

Following calibration the vessel will go to the first transect to the east and follow a pattern of parallel transects running east/west, at normal steaming speed (10.5 knots), progressing northwards. The whole survey area is bounded by 58º30’-62ºN and 02ºE to the 200 m contour. Transect spacing is 15 nm. This may be adapted during the survey to maximize area coverage given the time available. The proposed survey design is shown in Figure 1. 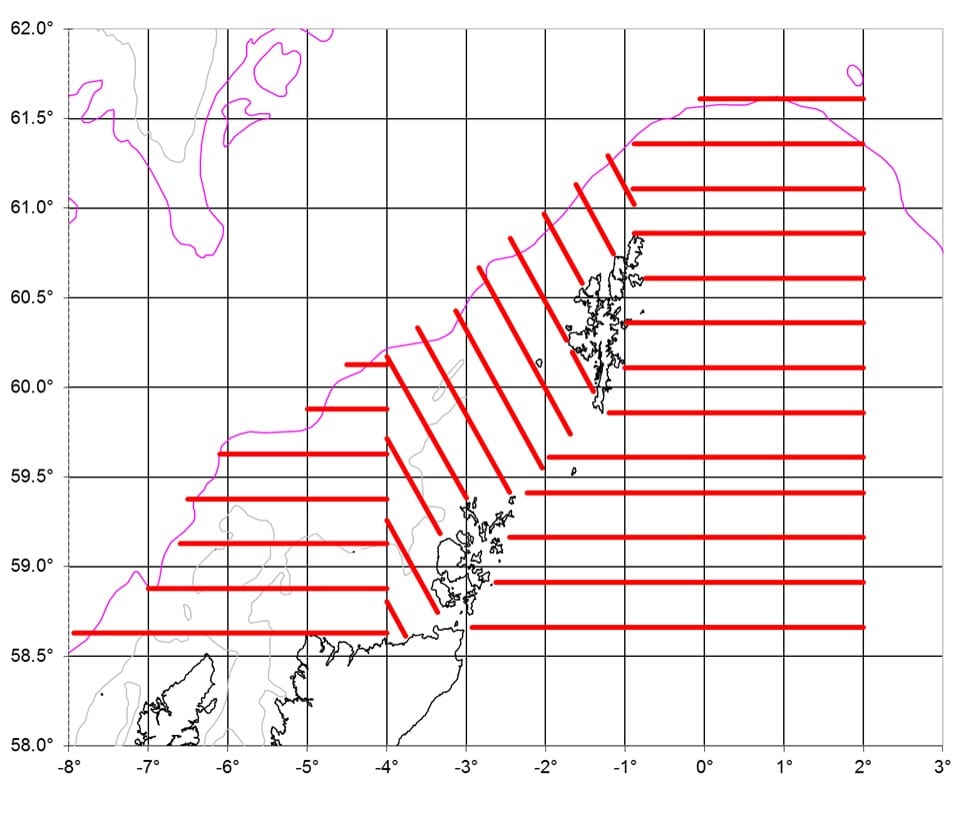 Acoustic data will be collected at four frequencies (18, 38, 120 and 200 kHz) between two and four times per day at any time between 03:00 and 23:00.  Fish shoals seen on the echosounder will be identified using either a pelagic (PT160) or demersal trawl (BT237) in consultation between fishing master and scientific staff.

Samples of all species caught will be measured for length to partition the echo integral amongst species and size classes for target strength functions. Individual herring, sprat and mackerel will also be weighed to establish a length-weight relationship. Otoliths will be collected from a sub-sample of the herring according to the following length stratified scheme to determine age:

For each herring in the sub-sample the state of maturity, gonad weight, liver weight, whole and gutted weight, presence of food in the stomach as well as the presence of Icthyophonus infection will be recorded. The maturity scale used throughout the survey will be the Scottish eight-stage scale.

Genetic sampling of herring for stock discrimination purposes will be carried out on selected hauls throughout the survey area.

Where sprat is encountered five per 0.5cm length class will be sampled for age, weight, sex and maturity.

In the area west of 4ºW, in addition to the above, random sampling of 120 fish above 24 cm length will be carried out for each haul with photographs taken for morphometric stock identification analysis and a tissue sample taken for genetic analysis. Otoliths from these fish will, subsequent to aging, be made available for morphometric analysis. After photographing them, and where possible, these randomly sampled fish will make up part of the standard sampling for herring. Additional fish will be collected to ensure the relevant numbers of fish are collected per strata for acoustic data analysis.

A GoPro camera and underwater lights will be mounted in the trawl to aid species identification by delivering additional information on composition of the catch. A GoPro camera may also be deployed manually on a small drop frame to investigate the feasibility of using this technique to verify species composition of echosounder traces in untrawlable areas.

A vertical hydro dip to collect temperature, salinity and dissolved oxygen measurements will be carried out immediately following trawls this is based on the requirement to achieve one station in each ICES rectangle.