News from our Scotia crew 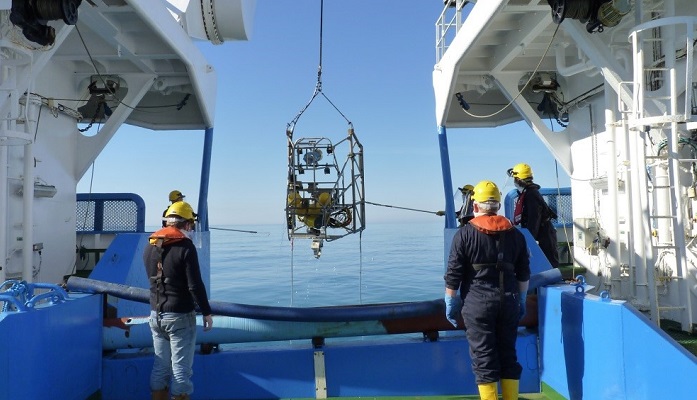 Colleagues have returned ashore from our marine research vessel (MRV) Scotia following a successful survey trip to collect information on the whereabouts of Nephrops norvegicus, commonly known as langoustine or Dublin bay prawns.

Nephrops is the second most valuable species landed by the Scottish fleet, representing 15 per cent of the value of all Scottish vessels’ landings. Some 450 vessels in the fleet land prawns valued at around £80 million per year, with £36.8 million in direct gross value added generation through capture and processing which employs almost 2100 people across Scotland. The importance of sustainable management of the Nephrops fishery to Scotland is reflected in the fact that it is the only shellfish species currently subject to a quota.

The areas where this underwater television (UWTV) survey takes place have been visited regularly over a number of years, usually using one of our research vessels, MRV Scotia or MRV Alba na Mara. The data we get from these surveys provides us with crucial information we need about these sea creatures and is used to provide Nephrops fisheries management advice.

Whilst at sea our team of scientists review footage of the muddy sea bed where Nephrops dig their burrows, this allows for statistical analysis to be carried out in real-time. Mud samples are regularly collected, which helps us to better understand their habitat preference. We also undertake some trawls to catch Nephrops, which enables us to monitor and record their size, shape and reproductive status.

Due to COVID-19 related guidance and rescheduling of surveys, this survey had to be adapted to incorporate additional tasks that hadn’t been possible when restrictions were at their height. In addition to the principal Nephrops work our team were tasked with recovering and deploy monitoring buoys, all equipped with oceanographic sensors and acoustic recorders, at monitoring sites in the North Sea and off the west coast of Scotland.

The devices are part of the Collaborative Oceanography and Monitoring for Protected Areas and Species (COMPASS) project. They record the sounds produced by marine mammals, including the songs, whistles and moans of larger whales and dolphins, the echolocation clicks of porpoises, and even some noises produced by seals!

During this work, our colleagues had the fantastic good fortune to witness two types of dolphin (white sided and bottlenose) leap up from the water and then slap their tails down hard on to the surface of the water. Later a large pod of dolphins accompanied the vessel as the crew worked through the stations. The retrieval and deployment of further moorings at Hyskeir, Barra and Tiree were all completed in good time.

In addition to the 300+ stations surveyed for Nephrops stock assessment purposes, three COMPASS moorings were recovered and a further five redeployed.  New equipment was trialled during the trawls, sediment samples for particle size analysis were collected from almost every station, and remote electronic monitoring data was generated from the trawl catch.

On the penultimate day of the survey, and in glorious sunshine and calm seas, the last of the TV stations at Devils Hole were completed. Then it was full steam back to Aberdeen after 23 days at sea covering Moray Firth, Firth of Forth, Fladen, North and South Minches, Sound of Jura and finally the Devils Hole.

Everyone on the team worked hard to ensure all the footage was reviewed to International Council for the Exploration of the Sea (ICES) standards (independently reviewed twice by different reviewers, results analysed for variation and reviewed again if required), then uploaded with associated datasheets to the bespoke UWTV database.