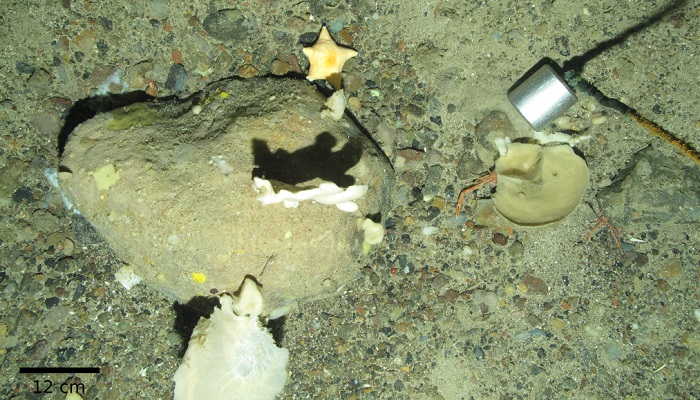 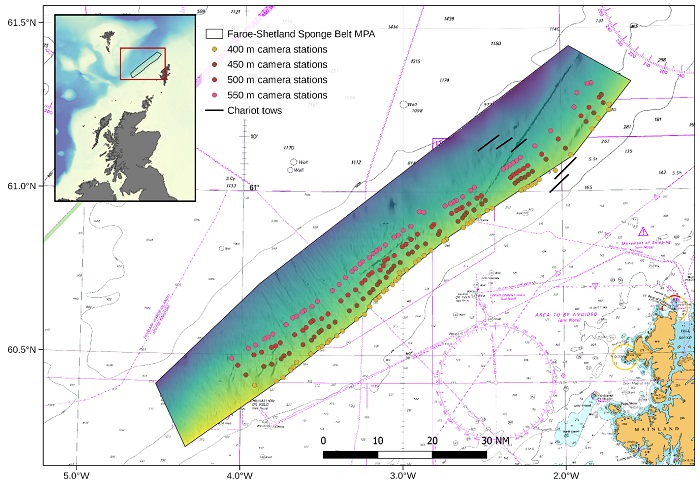 This is an area which has ideal conditions for the boreal ‘ostur’ type of deep-sea sponge aggregations to thrive. This giant sponge is nicknamed ‘cheesy-bottoms’ by some fishermen due to their appearance. The site which covers an area of 5,278 km2 and a depth range of 300 metre to 1000 metre is also home to sand and gravel sediments which support polychaete (marine) worms and a slow-growing type of clam called an ocean quahog.

It was designated as a MPA by Scottish Ministers in July 2014 for the purposes of nature conservation.

Sponges are one of the most primitive forms of multicellular animal life on the planet, with their fossil record stretching back some 600 million years. They are notable in the fact that their cells don’t differentiate into tissues or organs. Their basic structure is comprised of a mass of cells and fibres that is permeated by a complex and intricate network of canals that open as holes, or pores, that are often visible on their surface. This system of canals and pores give the sponges their scientific name, the Porifera, or pore-bearer.

Most sponges rely on maintaining a constant flow of water through their bodies to supply them with food and oxygen and remove waste and release reproductive cells. Remarkably, sponges can filter between 1,000 – 20,000 litres of seawater per kilogram of their mass per day, removing up to 95% of bacteria and particles from the water. They also provide a three-dimensional structure on the seafloor that is used by other marine animals such as: crustaceans (crabs, lobster, prawns etc), nematode (roundworms), marine worms, brittle stars and bivalve molluscs (scallops, mussels etc).

Our scientists have been using Marine Scotland designed and built drop frame and chariot camera systems to record still images and high-definition video of the seabed within the Faroe-Shetland Sponge Belt MPA. This will help to establish a baseline condition against which any change at the site can be assessed over time.

In order to get high accuracy positions of where on the seabed the photos and videos were taken they used an ultra-short baseline (USBL) system with a transponder fixed to the drop frame (Figure 2 above).  A suite of instrumentation was attached to the drop frame to give information on environmental parameters such as: depth, temperature and salinity.

Examples of what the seabed looked like can be seen below, in the main picture and in this video clip. After just over one week of the survey our scientists have collected more than 10,000 still images and 45 hours of HD video footage. 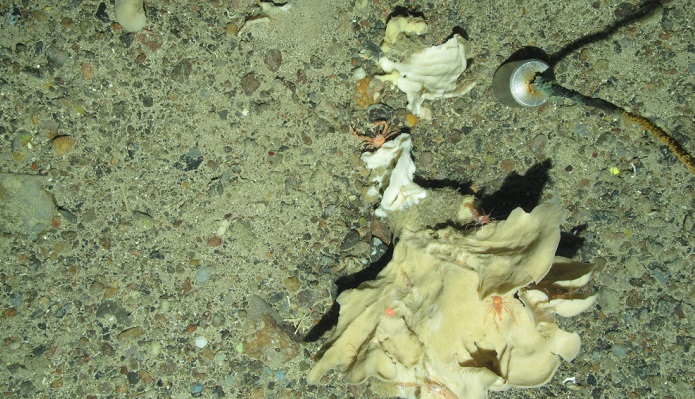 On board, the officers and crew of MRV Scotia have been expertly navigating the boat to allow data collection, deploying and retrieving the in-water equipment, making sure all the winches and auxiliary equipment is functioning, and keeping everyone well fed and ensuring morale is kept high.