The 2018 Rockall haddock trawling survey got off to a blustery start with Scotia departing Aberdeen on the morning of the 19th September and heading straight into the teeth of Storm Ali; the first officially named storm of Autumn 2018. Gusts of 70 knots SSW winds were recorded as she headed into the relatively calm waters of the Moray Firth to undertake a shakedown tow to test the trawl and associated instruments.

Progress along the North Coast was very slow the next day due to Storm Ali changing tack; which resulted in the wind shifting to be squarely against direction of travel for Scotia. Wind and swell

abated during the late afternoon/evening and finally good speed was made towards Rockall Bank.

Thankfully weather conditions once on the bank remained favourable throughout the remainder of the survey, allowing excellent progress to be made with on average six GOV (Grand Overture Verticale) trawls deployments being completed within each daylight period. The Rockall haddock survey utilises a semi-random stratified survey design that comprises four depth-separated sampling strata. The stations are randomly distributed within each of the four survey strata.

The number of stations within each depth strata is as follows:

The abundance figures resulting from these trawl samples, together with the corresponding biological information collected during the catch processing, provide Marine Scotland Science (MSS) with the tools necessary to create an age specific abundance index.  This is then used with the estimates from previous years to assess the relative strength of Rockall haddock. 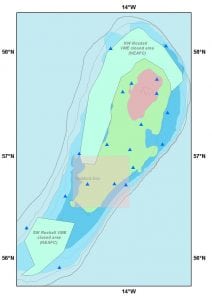 42 deployments were completed using the standard GOV survey trawl with 41 of these being valid. All 40 programmed primary stations were successfully completed; with an additional two stations also completed although one of these was invalid.  Scotia was therefore able to arrive back in Aberdeen on the 30th September having not only met but exceeded her core objectives.

All fish species encountered are recorded and in 2018 this yielded 47 species of fish and selected invertebrate species. In addition 19 CTD (Conductivity, Temperature, Depth) deployments were also completed for selected GOV stations and this provided a bottom temperature profile across the whole bank. (See figure 2 for CTD positions).

The haddock abundance index for Rockall cannot be calculated until the otoliths extracted during the survey are analysed and the ages discerned. Fin whales sightings were recorded during the survey; with the relatively calm conditions m 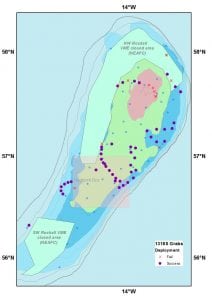 eaning that these majestic creatures were observed on several occasions on the top of Rockall Bank.

During the downtime at night, deployments of the new ‘Van Veen’ sediment grab were made and, after some initial teething problems, the new grab performed well with 47 deployments successfully completed. The sediment samples collected from this survey will be analysed and the results collated together with those collected from other samples and will be utilised in the ATLAS project that will attempt to correlate fish abundance and distribution on Rockall Bank with substrate type.