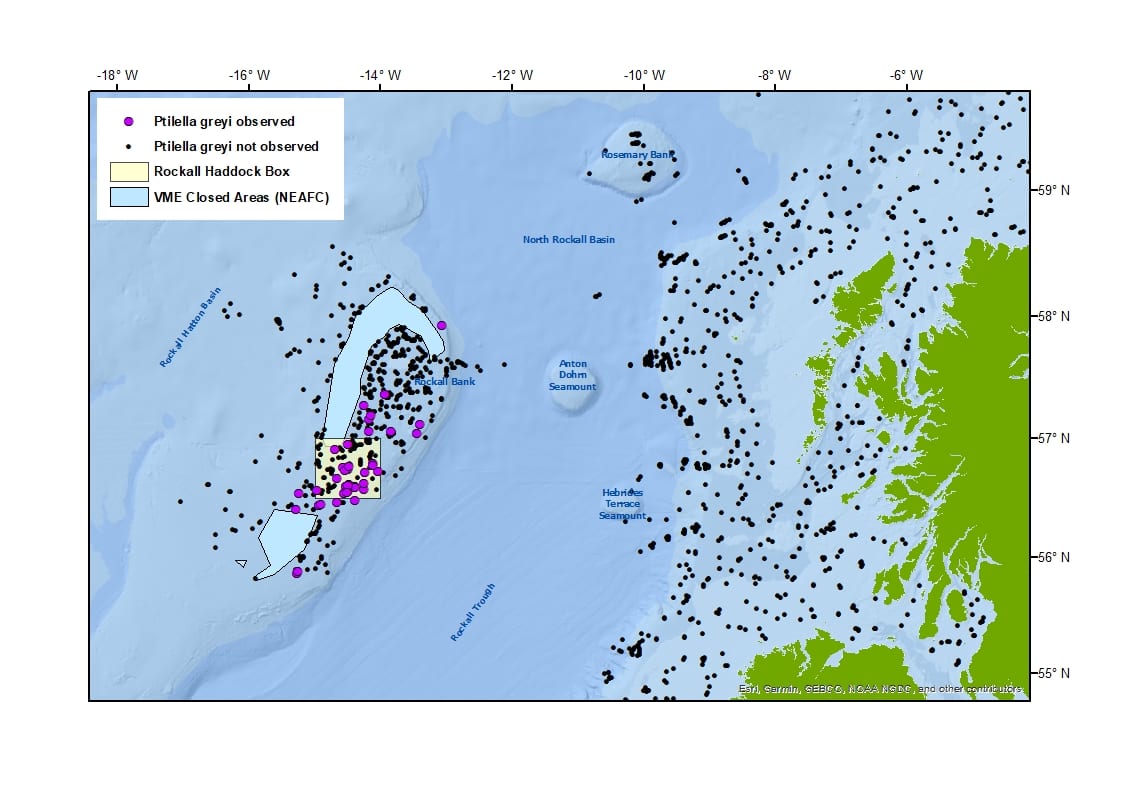 A view of each side of the same specimen of Ptilella greyi.

Scientists from Marine Scotland Science (MSS) have discovered a new species of coral on Rockall Bank in the North East Atlantic. The discovery is of an animal known as a sea pen, which as it lacks a hard outer skeleton is often described as a soft coral. The species is described fully in a scientific paper titled “Resurrection of the sea pen genus Ptilella” which was published in journal Scientia Marina in the later end of 2019.

Ptilella greyi is a large (up to 60 cm tall) ‘meaty’ sea pen that is widely distributed over central Rockall Bank within the 145-390 m depth range. One of the larger invertebrates now known to be present on Rockall Bank, the species was first found in 2007 by MSS scientists undertaking a routine survey with their research vessel MRV Scotia. Following the initial find, MSS scientist Jim Drewery undertook a full trawl inspection subsequent to every deployment within the area, sifting through around 1500 trawls over the next decade, looking for this new species. This allowed for the species distribution to be mapped coherently and for a picture to start building up; showing where the species was present and, also importantly, where it was not.

Marine survey expert Jim Drewery collaborated with sea pen experts Dr Pablo López-González and Francisco J. García-Cárdena from the University of Seville over this period, as new data and further specimens were found. The paper describes the taxonomic features of the species and, backed up by molecular data and literature searches going back to the late 19th century, indicated that the classification required the resurrection of the ‘extinct’ genus Ptilella, first proposed in 1870 by Dr John Edward Gray but discarded by taxonomists in later years.

Head of Marine Scotland Science, Tim McDonnell OBE commented: “This is another fantastic find that further highlights our expertise in marine science. Thanks to our long-term monitoring work that is facilitated through vessels like MRV Scotia, this sea pen has been correctly identified as a completely new species, for which the resurrection of the Ptilella genus was necessary.”

Named because of their close resemblance to quill-pens, sea pens are colonial animals that are found in the softer sediments of the seabed. Sea pens use specialised polyps (hollow stalks with a mouth and tentacles) to filter-feed, and are found in all oceans from intertidal areas to those more than 6000 m in depth. The image above shows a view of each side of the same specimen of Ptilella greyi.

The surveys that facilitated this research were part of a long-term monitoring programme by MSS that collects data on fish stocks in the deep sea. Surveys contributing data to this research included the annual Rockall Haddock Surveys, the annual Rockall Anglerfish Surveys and the ecologically themed (OFFshore Fisheries and CONservation (OFFCON) surveys of 2011 and 2012.

The original specimens of Ptilella greyi examined in this research will be displayed at the National Museum Scotland, the Natural History Museum, London, the Museu de Zoologia de Barcelona and at the University of Seville.