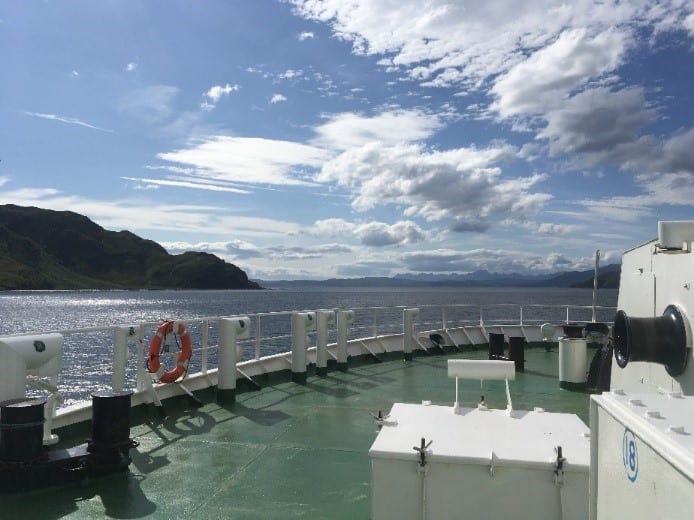 I am a second-year PhD student at the University of St Andrews and was recently very fortunate to be one of the research scientists aboard the Scotia 1019S survey that took us across Scotland’s seas at the end of July. Following an unpredictable summer, we weren’t sure of what to expect weather-wise at sea. However, we needn’t have worried, we were treated to clear blue skies and calm seas for most of the 10 days!

The researchers on board all had the common goal of improving our understanding of how organic carbon is cycled and stored within the marine environment and this was done via sampling the seabed and water column.

My PhD research is focussed on understanding the spatial distribution of organic carbon within seabed sediments on the Scottish Continental Shelf. It is understood that the seabed is a long-term store of organic carbon (that originated from the atmosphere as carbon dioxide), however there are gaps in our knowledge of more specifically where this carbon is found. Understanding the oceans’ role in storing carbon is important when considering this environment in terms of climate mitigation strategies.

I had two main aims for this data collection opportunity aboard Scotia. The first was to sample the seabed over as large a spatial range as possible. My project aims to generate a spatial inventory of organic carbon on Scotland’s Continental Shelf to build a picture of where carbon hotspots might exist.

As I am interested in the surface seabed, I used a Day Grab, which is lowered to the seafloor and triggered, to collect a large ‘scoop’ of sediment. Over the course of the cruise, I was able to collect over 130 grab samples from different locations on the shelf which I will analyse in the lab. This dataset will form a key part of my research to map the spatial distribution of organic carbon on the shelf. 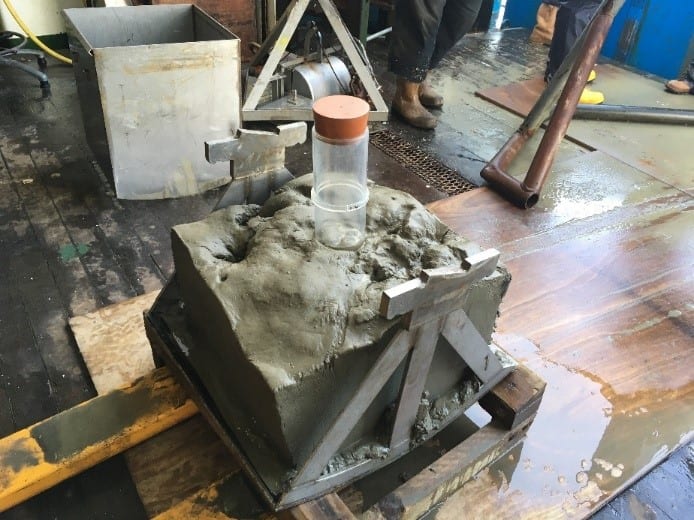 The second objective was to test a novel mapping method using multibeam backscatter data (acoustic data) to predict where organic carbon is stored. The seabed is a challenging environment to sample because we can’t ‘see’ it unless we employ some form of technology. Multibeam echosounders are used to map seabed substrates because of the relationships between how sediments reflect sound. If we can use sound to identify muddy sediments, we might be able to predict that these areas will also be enriched in organic carbon. To test this theory, I ground-truthed a multibeam dataset from the Moray Firth on the east coast of Scotland by collecting multiple surface grabs. I also collected larger, and deeper seabed samples using a box core in different sediment types to understand relationships between sediment type and organic carbon with depth. In the lab, I will analyse this sediment to characterise its physical properties and organic carbon content. This information will be used to understand the links between sediment type, acoustic backscatter data and organic carbon.

Prev Nephrops on the East Coast – An Update
Next We’ll be back! Our Return to the West Shetland Shelf