BlogsMarine ScotlandWe'll be back! Our Return to the West Shetland Shelf

We’ll be back! Our Return to the West Shetland Shelf

In addition to WSS, Pobie Bank Reef (PBR) Special Area of Conservation (SACs) is also considered as a contingency site but will only be visited in the case that it is not possible to survey WSS.

MPAs and Special Areas of Conservation (SAC) are designed to meet conservation objectives under the Marine (Scotland) Act (2010) and EC Habitats Directive (1992) respectively. These sites will contribute to an ecologically coherent network of MPAs across the north-east Atlantic, as agreed under the Convention for the Protection of the Marine Environment of the north-east Atlantic, or Oslo-Paris Convention (OSPAR) and other international commitments to which the UK is signatory.

Seven survey boxes have been positioned inside and adjacent to WSS MPA (Figure 1). For each box the priority is to:

The survey will be undertaken from the MRV Scotia with 16 days at sea. Two 12-hour shifts will be used to cover each 24 hour period. The night shift (00:00-12:00) will primarily be used for drop-camera sampling and the day shift (12:00-00:00) will primarily be used for grab sampling and multibeam acquisition. However, both shifts will be capable of using the multibeam and grabbing gear if necessary.

Due to the large area and depth range of WSS (4,083 km2 and 70-150 m, respectively) the site will be monitored using a nested box approach, to make the best use of the survey time available, and to increase the power to detect change within each survey box. The seven boxes are labeled A-G (A being the highest priority and G lowest priority) and have been positioned inside and outside WSS, each box has dimensions of 5 x 10 km (see figure 1). 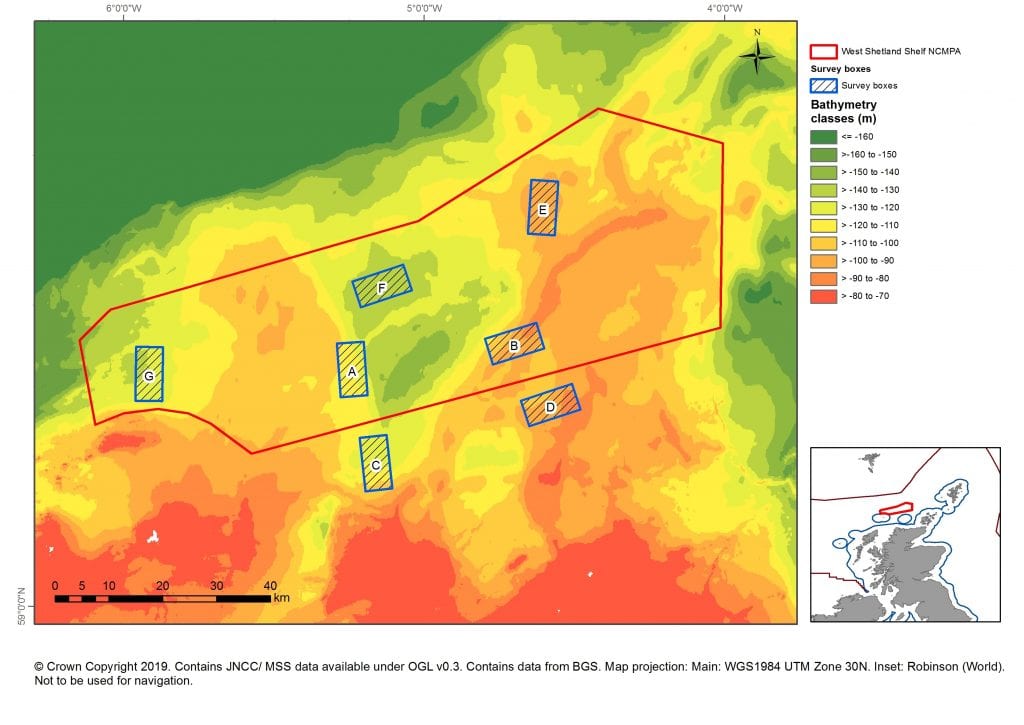 All sampling stations will be visited to acquire 150 m (~15 minute) drop-camera tows. At a subset of one station per survey box drop-camera tow replication will be increased.

At these increased replication stations, the vessel will move 10 m perpendicular to the direction of the first transect, and complete a shorter 50 m (five minute) tow and repeat this process until there are five approximately parallel transects (i.e. as parallel as is possible bearing in mind logistical constraints in terms of maintaining desired direction of travel along the five parallel transects due to potential changes in conditions (e.g. tidal direction and prevailing weather)).

These increased replication drop-frame camera stations will consist of five transects of 50 m length (the video from the single 150 m transect will be truncated post survey) placed within a 50 m radius bullring surrounding the station.

Video collected at each station will be assessed for suitability for grab sampling. A subset of stations which are deemed suitable will be revisited to collect a single Hamon grab sample. A further subset of three stations per survey box will be increased replication stations. At these stations a total of three replicate Hamon grab samples will be collected. Hamon grab samples must have a volume of 5 L or more to be considered valid for monitoring. Up to three attempts will be made to acquire a valid sample for each grab replicate.

A sub sample for particle size analysis will be taken from each grab sample, and the remaining sample will be processed using 1 mm sieves and fixed in formalin solution.

Pobie Bank Reef SAC is a contingency site. If this site is surveyed a similar sequence of multibeam acquisition, drop-camera transects, and Hamon grab samples will be followed.

At both sites additional grab and camera stations may be planned to address the secondary objectives.